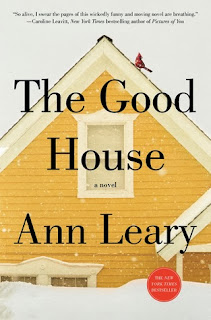 Hildy Good is a sixty-something real estate agent in the small fictional town of Wendover, MA. A year or so ago, her family staged an intervention for her alleged alcoholism and she is still resentful. Now she drinks only in secret - and of course in moderation. Hildy is trying to sell a house owned by a rather challenging couple who want to move so their son can go to a school that will be better for his disabilities. She has also lately befriended a newcomer to town, the much-younger Rebecca who, though married, is having an affair with her therapist. Meanwhile, Hildy is rekindling a decades-old romance of her own.

I'm so glad I heard Ann Leary speak at the Boston Book Festival. Although The Good House was on my to read list, it wasn't a very high priority. But I was so taken in with Leary's humor and stories of her own alcoholism that I downloaded the book from Audible soon after. At first, I thought the story was just ok, and it took me a bit to get into it. But then I became more and more invested and interested and really loved it by the end.

Hildy was such a fantastic character, whose foibles and humor were quite endearing. She knew everything that was going on in this town where she had spent her life, and I really enjoyed seeing it through her eyes. I really loved the small town aspects of this book, how everyone knew everyone else and had so much history they couldn't escape. (I love that in books, just not so much in real life, hence the reason I live in a city far from where I grew up.) She was known for being a bit psychic, but readily admitted it was no super power, just a good ability to read people.

As the novel progressed, so did Hildy's drinking and I became rather worried for her. She was completely disillusioned about her own ability to moderate herself. There were times she was able to go weeks without drinking, which she did to prove to herself that she could stop. But it was so easy to see why she thought the way she did, and why she was so bitter towards her children for getting involved in her life. If a grown adult wants to sit at home and drink an entire bottle of wine before bed, what business is it of anyone else?

This book and this narrator were made for each other. I probably would have liked the book anyhow, but the way that Mary Beth Hurt read Hildy's narration made her character really come alive for me, and I think some of her choices in tone and style added a great deal of feeling to the story. I highly recommend listening to the audio version.

What a great story about a small town and all its secrets! There was an interview with the author at the end of the audiobook, and she revealed that originally Hildy wasn't going to be the main character. It was going to be primarily about the affair between Rebecca and Peter, but Hildy's voice kept coming through so strongly that she ended up becoming the protagonist. This was clearly an excellent choice, as Hildy told the story of the town and some of its inhabitants so very well, even through (and maybe because of) her alcoholic haze.