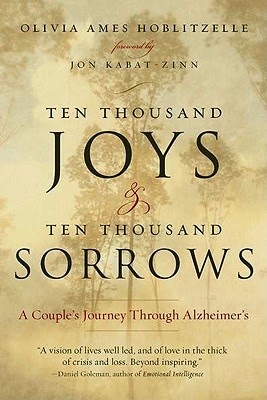 In this memoir of one couple's experience with Alzheimer's, Olivia Hoblitzelle shares what it was like to care for her husband Hob as his disease progressed. The couple took strength and guidance from their lifelong spiritual beliefs, which greatly helped them embrace the changes in their lives and come to accept Hob's eventual death. Each chapter ends with a list of reflections and suggestions meant to help others going through similar challenges, and finally a mantra, which Hoblitzelle calls a "seed thought."

This was less a straight memoir than a meandering collection of spiritual reflections. It was sort of a Buddhist self-help guide for people dealing with Alzheimer's. Unfortunately, I am probably the least spiritual person on the planet and clearly not the audience for this book. In fact, if someone were to set out to write a book that I'd dislike intensely, this might be that book.

Before I go into the finer points of its merits and shortcomings, I feel I should explain that the only reason I even finished reading such a thing is that I'm on the selection committee for my library's community read, for which this book was nominated. I didn't think I'd love it because it was described as a memoir about Alzheimer's, but I remembered how pleasantly surprised I was when I read Still Alice by Lisa Genova, so I went into it with an open mind.

To give credit where it's due, Hoblitzelle is very insightful and her advice seems like it would be quite valuable to others in her situation. Many of the moments she describes were surprising and touching. For instance, in the early stages of the disease Hob is giving a talk that he has spent months preparing for out of fear that he will forget everything while he's talking. During the speech, he indeed loses his train of thought completely and his copious notes don't help. Rather than slinking away, awkward and embarrassed, he talked through what was happening, which many in the audience found impressive and inspiring. It was a great story.

But such anecdotes were few and far between. Most of the book was naval-gazing reflections only occasionally punctuated with recounting of events and I was left with a lot of questions. I wanted to know how their kids handled their father's decline, and how old were their kids anyhow? What was it like when he had to give up his work? How did Olivia schedule her days now that she had to oversee everything he did? How did their friends react to Hob's decline? So many details were left out.

In the 293 pages of this book (not counting the Appendices, which I skipped) she probably used the word "journey" at least 300 times. I'm a little irritated as the use of the word "journey" to describe life events anyhow, but the overuse was excruciating. Her pool of adjectives consisted primarily of "lively," "joyful," and "playful." My eyes became exhausted from all the rolling. Additionally, she would tell and not show. For instance, she once mentioned that their relationships with friends and family changed because of Hob's illness, but didn't give any examples to illustrate this.

It's obviously not the author's fault that this isn't my sort of book, and I was determined to finish it to give it a fair shake, but even objectively the writing was mediocre. Combined with the rather meandering style and focus on the internal rather than day-to-day experiences, I'm afraid this was rather a slog for me to get through. However, if you are close to someone with Alzheimer's and practice (or are open to) this particular sort of spirituality you may find it helpful and comforting.
Posted by 3goodrats at 9:46 AM