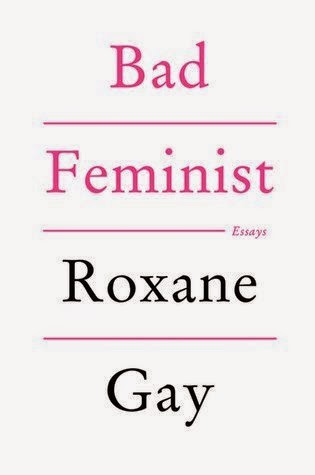 I've been following Roxane Gay in the media for a while, so it was high time to read one of her books. Bad Feminist is a collection of essays about feminism, race, politics, and pop culture. A couple were a bit esoteric, but most were totally accessible and relatable. Gay has strong feelings about these issues, but she's also very forgiving and acknowledges that none of us are perfect at living up to ideal standards, including herself, hence the title.

There were a few essays that especially resonated with me. "Not Here to Make Friends" is a condemnation of the double standard requiring fictional female characters to be likable while male characters have much more leeway regarding what sorts of people they are. (It goes without saying that it's already the case in real life.) I was quite familiar with a couple of the examples, Charlize Theron's character in the movie Young Adult and the protagonist in Claire Messud's The Woman Upstairs. Many criticisms of this movie and book centered around how unlikable the characters were. Yet Gay points out that male characters can be downright despicable as long as they are interesting and well-developed. (For the record, I loved Young Adult and although The Woman Upstairs didn't blow me away at the time, it has grown on me considerably in the year since I've read it.)

There's been a lot of recent discussion about trigger warnings, and I feel vaguely opposed to them in a way I can't put my finger on. But Gay does so quite articulately in "The Illusion of Safety/The Safety of Illusion." She points out the difficulty in practical terms, citing an extensive list of topics that she has seen trigger warnings for (eating disorders, poverty, Dan Savage) which perfectly illustrates her conclusion that "Life, apparently, requires a trigger warning." Her next question is how explicit the treatment of the topic must be to merit a warning. Must it be a graphic description of rape, or just the word "rape"? Yet despite these complications and her feelings that no amount of warnings can make our lives feel as safe as we'd wish, she has obvious compassion for people who have gone through traumatic events, and she ultimately isn't opposed to the warnings if people want them. It was an interesting discussion that basically amounted to an argument with herself. And I agreed with both sides of that argument.

Other essays I enjoyed were about the HBO show Girls, Scrabble tournaments, female friendship, sexual violence in popular culture, and The Hunger Games, among others. She just covered so many topics it was rather a whirlwind of interesting ideas.

There were only a few times where her opinion departed from mine. In her critique of Caitlin Moran's How To Be a Woman, she pointed out a passage in which Moran stated her desire to reclaim the label "strident feminist" the way that the N-word has been reclaimed. Gay sees this statement as racist, in that Moran is comparing the two labels, but I don't believe Moran was implying that the labels were equally offensive. Gay also took issue with many of Moran's statements and thought she was undermining her arguments for the sake of humor. I actually think Moran is just naturally funny (as opposed to trying to be funny), and perhaps her arguments aren't impeccably thought out but her book is more of a memoir than a scholarly treatise on feminism.

In writing about abortion, Gay characterizes the issue as a fight between politicians and women, as though all politicians are male and all women are pro-choice. Abortion is a pretty complex issue (though Gay would probably agree with me that it shouldn't be) and her oversimplification does a disservice to her argument.

Overall, the places where I disagree with her are few, and for a collection of so many opinions on such a wide range of topics, I wouldn't expect to agree with everything. Feminism is a pretty broad concept and there are many ways for it to be expressed, and vast room for disagreement within it. In general, I like how she thinks about it, despite calling herself a "bad feminist."

On the contrary, I think she is the best kind of feminist. Here is a woman who is clearly brilliant and a skilled writer, who can criticize without being constantly offended, and who understands the appeal of pop culture. She takes issue with Kanye West while acknowledging how good "Blood on the Leaves" is (and it is!) because she is not some feminist scholar who lives in an isolated tower, untainted by the world. She's a real person who lives in the world and engages with all parts of it, with all the complications that real people have. If she's a bad feminist, then aren't we all?
Posted by 3goodrats at 6:24 PM