Funeral in Blue by Anne Perry (2001), narrated by David Colacci 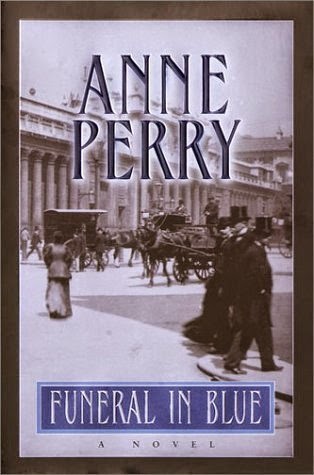 When two very different women are murdered together in an artist's studio, the case takes Hester and William Monk to gambling halls and the streets of Vienna. They delve into the personal lives of people close to them, and research the Vienna Uprising in 1848. One of the victims was the wife of Christian Beck, a doctor in a hospital where Hester has worked, making the case very close to the Monks and their friends.

I think most of the audiobooks in this series are narrated by a woman so I did not have high hopes for this male narrator, but I was pleasantly surprised. The book itself, however, left a lot to be desired.

The way the stories usually go, Monk and Hester start out thinking the case is about one thing, but when they follow the trail it leads them to something else entirely. But with this one, it turned out not to have anything to do with anything they had been investigating and was basically all a misunderstanding. So, not very satisfying.

I've also gotten over the whole crazy introspection/mind-reading thing. Hester and Monk are constantly extrapolating a ton of information based on looking in someone's eyes. This is not limited to this series, of course, but is quite prevalent and I find it ridiculous. You simply can't glean more than someone's general mood from looking in their eyes or observing their expression, you just can't. This is something I'm willing to overlook if the story is better, but in this case I couldn't.

In general, this is a pretty good series and I'm a little surprised to see that I've already read twelve of them. I was considering stopping after this disappointing one, but then I read the description of the next book and it sounds more appealing, particularly since there is progress in the overarching story of William Monk's memory loss. So perhaps I'll continue on to the next book one day.
Posted by 3goodrats at 9:00 AM