The Chocolate War by Robert Cormier (1974) 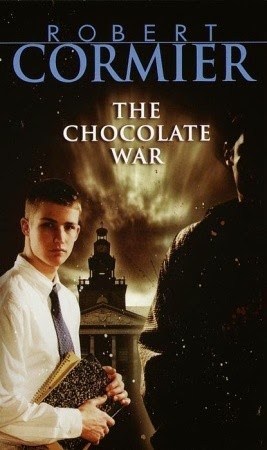 It's time for the annual chocolate sale at Trinity, an all-boys high school run partly by some ill-equipped and slightly sinister Brothers and partly by a not-so-secret society of students called the Vigils. This year Brother Leon stupidly bought twice as many chocolates for the sale and is now asking the students to sell them for $2 a box instead of $1. So, the Vigils are always setting up stunts by bullying unwitting kids into doing their bidding, and this time they pick on Jerry Renault and tell him to refuse to sell the chocolates for a certain number of days. Then he is supposed to start selling like everybody else, but he doesn't. He continues to refuse until the Brothers and the Vigils are both after him.

For Jerry Renault, I think there was supposed to be some connection between his mother's death and his refusal to sell the chocolates, but honestly I had no idea what the connection was. It was more like he was told to refuse to tell them, and then told to start, but he impulsively refused to sell for reasons he was unsure of himself, and then he felt like he had to stick with it because he was committed to the bit.

I didn't feel like the characters had real personalities. The Brothers were all a bit sinister and the boys all masturbated a lot. The end. Jerry was the most developed character and I still didn't get enough to really feel much for him or his situation. I don't know what he was thinking when he did the things he did. Told in third person and although we got some thoughts from the several of the characters, it still felt a bit distant somehow.

Mostly, the story was about bullying. I did not like these boys, or their teachers, but I was sympathetic to the victims of the teenage power struggle that was going on. I kind of liked the idea of the story and it wasn't bad, it just wasn't especially good. It certainly doesn't hold a candle to the best bullying book out there, Stephen King's Carrie.

The Chocolate War is kind of a classic of teen lit, being one of the few YA novels written back in the 70s. I just don't have a whole lot to say about it, and my struggle to come up with something has made me feel a bit more negative about it than I did when I was reading it. I gave it three stars on Goodreads, which means I liked it but didn't love it.

I have a vivid memory of another Robert Cormier book that I read, maybe more than once, back when I was a teenager and I feel like I have to mention it. It was called After the First Death, and it's about a group of terrorists who take a bus of kids captive and start killing them. It is way more exciting than a bunch of boys being mean to each other at school. I still remember the silver cover on my school library's copy. I wonder now if it's as good as I remember it, or if it was just good compared to all the other crappy books I was reading at the time?
Posted by 3goodrats at 6:22 PM