I started a pair of socks back October and now that I've finished, I realized I haven't even shown you a progress shot since the very beginning. Well, five months later I have a new pair of socks!

To be fair, I could have finished them ages ago, but kept setting them aside to wait for a knitting group night because I didn't have another portable project that was easy enough to work on while socializing. Eventually, I said to hell with it and just finished them.

The pattern is Pharoah's Check from Sensational Knitted Socks. I've been wanting to do one of these mosaic-style colorwork patterns for a while. In fact, I've done very little colorwork which brings me to the weird striping thing on the toes. We need to talk about this. 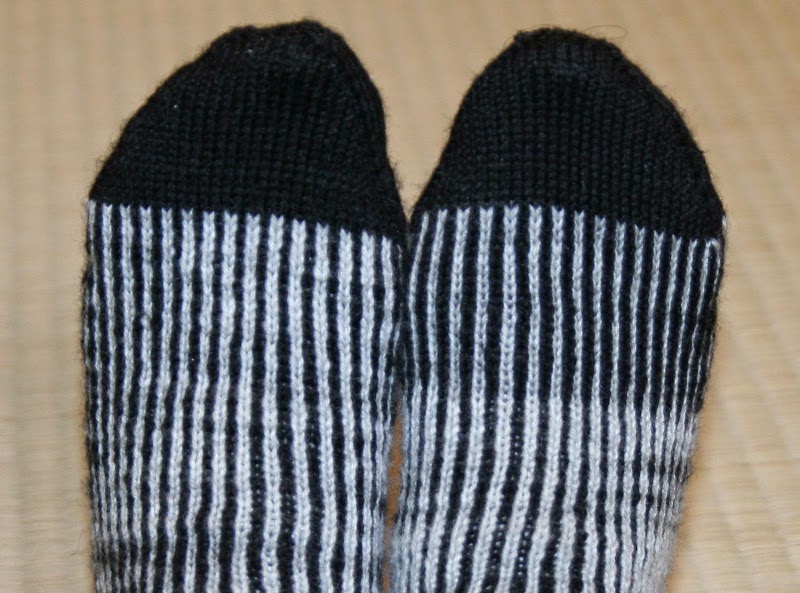 Do you see how the stripes on the right foot suddenly look more black as we get closer to the toe? There's a definite line of demarcation where the black somehow suddenly pops out.

This has to do with how you hold the two colors of yarn, and which one you bring over/under the other one when you switch. One is always more dominant and you need to make sure it stays consistent. Because I haven't done much colorwork I wasn't really paying attention, although it is something I vaguely know about. I was aware, as I was knitting, that I wasn't consistent, and I knew it would make a difference. But honestly, they're socks, and I don't care a whole lot. It didn't seem worth the trouble of trying to keep track of which color I was bringing over or under which color each time I switched. I don't know if there's a trick to keeping track, and if it applies to all colorwork or just vertical stripes, but I'll certainly figure it out if I plan to do a pattern like this for a hat or a sweater.

All in all, I think these came out pretty nice. They fit and feel good, and I'm sure I'll get a lot of use out of them.
Posted by 3goodrats at 2:23 PM