It Will End with Us 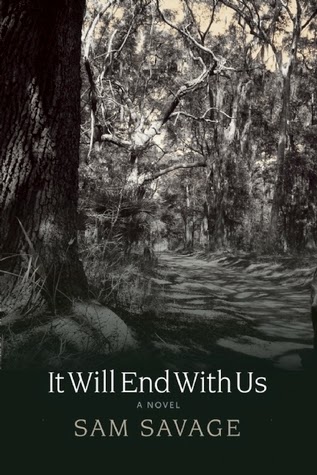 I read the newest Sam Savage book unexpectedly last weekend as a means of procrastinating from a novel I was struggling with, and what a nice little side trip it turned out to be.

Like his other novels it's super short, just 150 sparsely-worded pages. And like his other novels, it's packed with emotion and atmosphere. At the heart of this story is Eve, an older woman recalling her childhood in South Carolina, especially her relationship with her mother. Currently, Eve is being cared for - perhaps in a nursing home or similar place - and it's clear that she is in decline. She moves back and forth from ruminating on her missing hairbrush to thinking about her mother's failed efforts at writing.

There's no plot, just meandering thoughts expressed in short paragraphs, some of which are sort of truncated sentences, like "The time I put Thornton's paper dolls in the fire, after he wouldn't talk to me at school." It can jump around a bit too, one paragraph not necessarily leading to the next, but it's never confusing or jarring. It's just like a wandering mind.

There were some sad moments that have stuck with me. Eve and her mother both loved the arts, but couldn't quite grasp them. When Eve was young her mother spent a great deal of her time writing, and Eve remembers the moment when she realized that her mother was a failure as a poet, that what she wrote wasn't actually literature. Eve also points out at the beginning that she has never seen a famous painting, and then later tells about a time when she tried to visit a museum and was denied admittance:

"I remember that I cried when we found out the museum was closed to the public, sensing, I suppose, even then, that I was never going to see an actual painting by anyone famous."

I bought It Will End with Us a couple of months ago and was just waiting for a day at home alone to read it all in one sitting, but that's not what happened. Instead I picked it up impulsively at a time when it was exactly the one thing I wanted to read. I was worried because I've liked all of his books so much I'm always afraid the next one will be the bad one, and I was even a little unenthused for a while reading this, but once I became immersed in Eve's internal world I liked it much more. It's not my favorite, but it's still very good. His books are totally character-driven and Eve is probably his most realistic character and I think this is the least humorous story. I'm pretty sure I said the same thing about his last book, The Way of the Dog, but it was true about that one, and now it's even more true about this one.
I don't know what it is about Savage's work that speaks to me so much. His books don't have very high ratings on Goodreads and it doesn't even bother me. If I see a low rating from some other reader, I just think "Eh, it's not for you." I wouldn't care if noone else in the world liked his books, and I wouldn't try to convince them. He could just send me his manuscripts written in longhand for all I care, and I'd be glad to read them. He published his first novel when he was 65 and I hope he'll be around long enough to write a bunch more, but on the other hand I find his work so re-readable I could be content forever with what I have now.
Posted by 3goodrats at 8:40 PM

Labels: books, fiction, it will end with us, reviews, sam savage

I've not read one of his books, but I have Firmin here. Sounds like I should give him a try!

I think my two favorites are Firmin and The Cry of the Sloth. They're short there's no reason not to give them a try!