All the Truth That's In Me 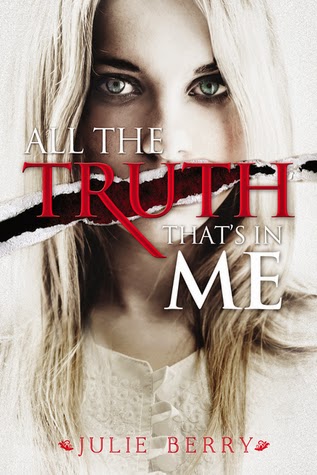 Judith and her best friend both disappeared from their small town of Roswell Station four years ago. Two years later, Judith returned alone, with her tongue cut out. Treated as an outcast, she has tried to keep to herself, while secretly longing for the boy she has always loved. When the town is attacked she helps in the only way she knows how, and now there are even more questions about her disappearance.

Despite the cover and how the description sounds, this is not a contemporary crime novel. The community in which Judith lives seems to be Puritan, complete with stockades in the village square. The people who attacked them are described as "homelanders" - the English? It is all a bit unclear, which only adds to the mystery.

Written in second person, Judith is speaking the entire time to Lucas, a boy she has been close friends with since they were little, and who she feels more for now that they are older. Of course, now that she is mutilated and it's taken for granted that she has been defiled, he is unlikely to care for her. (And if you think Lucas is that insensitive, you haven't read very many books.) Second person should be awkward, but here it's not. In fact, the writing style is quite sophisticated and the story well-crafted.

Judith was a compelling character, one I rooted for. She was treated so unfairly by her mother, who seemed to blame Judith for what happened to her but should have been protective of her and glad to finally have her home. The rest of the town seemed to either be suspicious of her, or want to take advantage of her inability to speak. She did find one friend who encouraged her to come out of her shell, and her brother Darrel was also on her side. I loved this mixture of enemies and allies, and the tension it created.

There aren't enough books that take place in colonial America, and this one was incredibly unusual. Judith was an uncommon character, and everything about her story was unfamiliar and maybe even a little disorienting. But once all is revealed, it was very satisfying. It was also impossible to put down. I think this considered young adult, but I'd put it firmly in the crossover category. People who don't read young adult would still like it, and might even be surprised if you told them it is YA, but teens would also find it gripping. Highly recommended!
Posted by 3goodrats at 9:00 AM

Labels: all the truth that's in me, books, crossover, fiction, julie berry, reviews, YA, young adult