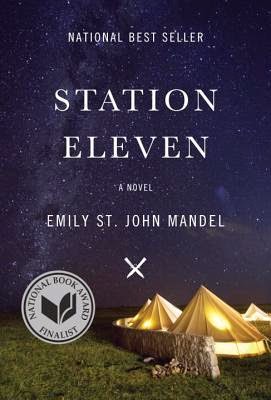 An actor playing King Lear collapses on a stage in Toronto, while a horrified audience looks on. Almost immediately after, a deadly flu spreads across the globe leaving few survivors. Twenty years later, a troupe of musicians and actors travel the Great Lakes region performing among the small villages that remain in this new civilization. Their motto is taken from Star Trek: Survival is insufficient.

There are many major characters in the book and their lives are intertwined in ways that don't always seem obvious, both before and after the catastrophe. They all relate in some way to Arthur Leander, the actor who dies in the very beginning, just before the flu takes hold. One of the most fascinating aspects of the book is the way each character is changed by what happens, and how they touch the lives of others, even those they have not met.

When I think about this book, so many images come to mind: Arthur's ex-wife Miranda, on the beach in Malaysia after she has received the news of his death; Jeevan Chaudhary, an entertainment photographer, skulking outside Arthur's house hoping to get the perfect shot; Arthur's best friend Clark, twenty years after the flu, living in the airport where he was stranded when the planes stopped flying. With almost the entire population of the world wiped out, everything has come to a halt - transportation, running water, electricity, the internet. There's a reference to another post-apocalyptic novel, The Passage, when someone hopefully speculates that the catastrophe may just be confined to North America. There's a scene in which Kirsten, who had only been 8 when it happened, has a question about multiple universes that she cannot get answered. She says, "None of the older Symphony members knew much about science, which was frankly maddening given how much time these people had to look things up on the Internet before the world ended."

I love a good apocalyptic novel, and this is a great one. One of the things that frequently frustrates me about post-apocalyptic or dystopian novels is that you never get the part of the story where the big changes occurred. Usually the focus is on the world now and that is totally fine, but just occasionally it would be nice to get that part of the story. Satisfyingly, Station Eleven includes many parts of this catastrophe - before, during, and after - just not in a linear fashion. I think the book it reminds me the most of is The Dog Stars, another post-apocalyptic novel, which shares an atmosphere both bleak and hopeful, and similarly exquisite writing.

Station Eleven has been getting tons of accolades, including nominations for the National Book Award and the Baileys Women's Prize for Fiction. I've been wanting to read it for a while but held off because my book group chose it a few months ago for this month. I'm so glad I was finally able to read it! I'd highly recommend it to anyone who likes a good story, but it's essential for readers of post-apocalyptic fiction.
Posted by 3goodrats at 9:14 AM

You loved it too? I guess I'm going to have to get hold of a copy soon!