How To Be Your Dog's Best Friend 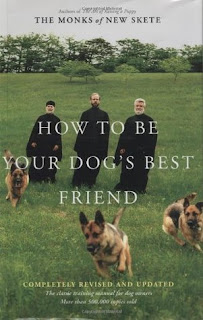 The Monks of New Skete breed and raise German Shepherds and are respected authorities on dog training. This guide begins with an introduction to dogs and dog behavior, paying special attention to the differences between breeds, and goes to offer specific advice about training, problem behavior, and how your dog fits into your life. Reading about dog training can be very boring, but it's something I just need to learn about. Luckily, this book is written in a pretty easy-to-read style, with very short chapters and a lot of photos.

Their training style was pretty refreshing. They don't treat heavily, but instead use a lot of praise, and though they use positive reinforcement they also use correction (usually just a leash pop.) We got our dog from the MSPCA and did obedience training there, and they are very firmly into positive reinforcement only: reward good behavior and ignore the bad. To me this seems rather idealistic and doesn't take into account the individuality of each dog. Many of the training methods assume a certain response on the part of the dog, which is frustrating if your dog doesn't respond that way. Also, ignoring bad things doesn't make them go away, to me it seems ridiculous not to actually address certain bad behaviors (i.e. biting, which is one of our dog's problems.) Anyway, I know that the Monks of New Skete are pretty respected so it's good to know that discipline/correction isn't considered out of the question by all dog trainers. It's good to have options.

As I already learned not long ago from Pit Bulls for Dummies (which I read most of but didn't review here) different breeds of dog were originally bred for specific purposes, and certain traits remain. The Monks discuss this as well and I find it pretty interesting, and it explains why our dog will probably never be able to behave at a dog park (pit bulls were bred to be aggressive towards other dogs, and she definitely has some issues there.) There are also some crucial stages in a puppy's life during which if they aren't trained or socialized properly, the problems may never be totally overcome. We don't know our dog's history, but I can't imagine she was trained or socialized well as a pup considering she was abandoned on the streets. This all seems like bad news for us, but actually I like knowing which problems to focus on and which to just let go.

Other takeaways from the book were that dogs should sleep in the bedroom (but not on the bed), shouldn't be trusted to have the run of the house until they're 1.5-2 years old, and that you should clean their ears every week (blech.) It was also helpful to read their methods of teaching various commands, even though we've already taught the basics to our dog. Not everything made total sense to me; the book occasionally used terminology I was unfamiliar with but that they apparently assumed readers would know. When they mentioned a dog's "withers" I had to Google it because I didn't know what part of the body that was, and I don't know what a "bark collar" is either, but didn't bother to look it up.

At the end, they provide a list of resources for further reading, which is great though I'm unlikely to spend much more time reading about dog behavior. The list is also a bit dated since this edition is from 2002, but I honestly don't know how much difference that makes. At the time of publication, clicker training was just becoming popular and apparently positive reinforcement was also a recent trend so things have definitely changed, like in any other area. But still, it was a pretty informative, useful guide.
Posted by 3goodrats at 9:32 AM

Labels: books, how to be your dog's best friend, monks of new skete, nonfiction, reviews