Radioactive: Marie and Pierre Curie, A Tale of Love and Fallout by Lauren Redniss (2010) 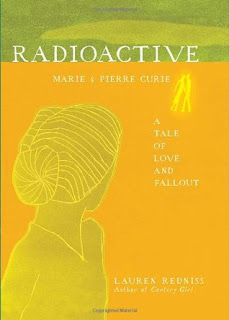 Marie and Pierre Curie met and fell in love in Paris in the 1890s. They worked together and discovered two new elements (radium and polonium) and recognized radioactivity as an atomic property, for which they won the Nobel Prize. When Pierre was killed suddenly, Marie continued alone, going on to win a second Nobel, the first person to ever do so. The story is under 200 pages and filled with lush illustrations, making it a great pick for those who want to learn about the Curies but are scared off by lengthy science-heavy biographies.

There is science in it, but not too much for someone like me with a very weak science background. Redniss gives you just enough to understand their work and why it was important. The focus is more on the biographical aspect of the story.

The Curies were alive during a very interesting time. Advances in science seemed magical to some people, and increased their willingness to believe in other fantastical things. The Spiritualist movement had been increasing in popularity and now was reaching its height with a proliferation of mediums who claimed they could contact the spirits of the deceased, using photography to provide "proof" in the form of hazy shapes. Even the Curies were known to attend seances.

After Pierre's untimely death, Marie eventually began a love affair with a man who turned out to be married. Her relationship with Paul Langevin was found out by his wife and made public, creating a scandal just as Marie was scheduled to travel to Sweden to accept her second Nobel Prize. Fun fact: their relationship didn't work out, but Marie's grand-daughter ended up married to Paul's grandson. They were both scientists, too.

The best part of this book is the beautiful art, and it's worth picking up just for that. Redness used a technique called cyanotype printing, which she describes in a note but which I didn't really understand because it is science-y. But it creates vivid, saturated images that make the book feel light and fanciful. It's really a lovely work of art.
Posted by 3goodrats at 7:30 AM