The Forgotten Girls by Sara Blaedel (2015) 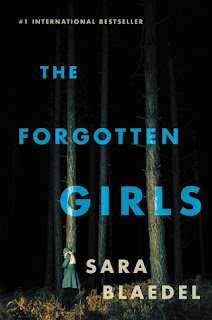 A woman is found dead in a forest in Denmark, but nobody has reported her missing or come forward to identify her. When the police release her photo to the media, an older lady says she recognizes the woman's distinct scar, and that she cared for her as a child at a hospital for the developmentally disabled. When Louise Rick begins investigating, she finds a death certificate for the girl - and her twin sister - issued 30 years ago.

The sisters were "forgotten girls," dropped off the hospital and never visited by their families. At the time, it was recommended that families sever contact to make the permanent hospital stay less traumatic. This way, kids wouldn't live in hope of their families someday coming back to take them home. This background made for a pretty sad story, but also an intriguing one.

The central mystery was a great setup, as was Louise's situation at work in the newly-created Missing Persons Department. She was hoping to hire her own staff, but on the first day she found that someone had been assigned to her; not only that, but she had to go fetch him because he was hungover and overslept. This sub-plot about Louise's relationship with her co-worker was an interesting one, but I think it will developed more in later books in the series.

While Louise is investigating, there are more murders and a disappearance which, predictably, are all related. I had some ideas about where this story was going, but when it all came out it was worse than I thought, and some of it was a little implausible. Not what happened, but certain characters' attitudes about it. Not everyone in my book group agreed with my criticisms though, so this might not bother other readers. Better character development would have improved this aspect of the story for me.

Camilla, a journalist and Louise's friend, decided to also start investigating the case, but separately without consulting Louise. She could have been replicating Louise's work and screwing things up for the investigation - which is what I thought was going to happen - but it just happens that her nosing into police business was super helpful. I found Camilla's subplot (which also included some romance drama) to be unnecessary.

Although this novel had a lot of elements that should have worked for me - crime, Scandinavian setting, secrets from an old hospital - somehow it just didn't quite hold together. I think there's much better Scandinavian crime out there than this one, which I only found to be ok. The Forgotten Girls is seventh in a series and I haven't read any of the others, but I'm unlikely to try them.

Have you read anything by this author? Do you have other Scandinavian crime novels to recommend? The only other author I've read in this genre is Stieg Larsson.
Posted by 3goodrats at 7:30 AM