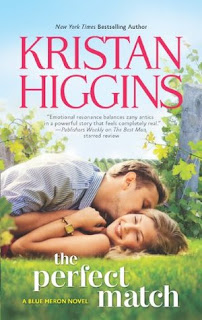 For her whole life, Honor Holland has been in love with her good friend Brogan. Finally, she decides it's time to lay her heart out on the line. When he rejects her, she's devastated. But when she learns that he is suddenly engaged to her best friend Dana, she is pissed. So much so, that she ends up in a barfight over it. Classy. This is the same night she meets Tom Barlow. Tom is a teacher of mechanical engineering, and ever since he started there are suddenly far more women taking up the subject. An even bigger problem is that he has just learned the school won't renew his visa and he's in danger of having to go back to England, too far from his unofficial stepson, Charlie. Unless, just maybe, he can find someone to marry him. Well, Honor is free and available now, and as her ob/gyn has just reminded her, time is growing short if she wants to have children. Perhaps a marriage of convenience will work out well for everyone.

Obviously it is not that simple or it wouldn't require a whole book. Honor and Tom do hook up the first time they meet, but later when they decide to commit marital fraud and move in together, they decide not to have sex in an effort not to complicate things. This, of course, makes things worse because they became so tense and weird around each other. Honor acknowledges it probably would have felt more natural had she not suggested this stupid no-sex idea, but unlike many contrived romance plots based on neuroses, here it was fairly convincing. Honor was fresh from a pseudo-relationship in which she was hurt when she let her feelings show, and she wasn't about to get wrapped up in another guy who probably wasn't that into her. Tom's last relationship was with Charlie's mother who he was engaged to but, as it turns out, wasn't as in love with him as he was with her. And he has a lot at stake with this marriage; the one great thing that came from his relationship with Melissa was her son Charlie, to whom Tom was completely devoted. Leaving him to go back to England would be disastrous.

There were a lot of great relationships in this book, but my favorite was the one between Tom and Charlie. Although they were close when Charlie was a kid, after his mother died things changed. Charlie's father is rarely in the picture, only swooping in briefly now and then, so the withdrawn, sullen Charlie now lives with his grandparents who barely care about him while Tom is stuck with only seeing him once a week. Even then, Charlie barely speaks and shows no interest in Tom or the activities he plans. Once Honor enters the picture - well, to be honest it's more Honor's teenaged niece Abby - Charlie starts to come out of his shell a bit. I loved how all of this shaped up throughout the book. It was so heartbreaking and sweet.

Kristan Higgins is good with family stuff. One of my favorite aspects of the first book in this series, The Best Man, was story of the Holland family and their vineyard, which was continued here. I like that the family is imperfect, but not dysfunctional. They're easy to like, but not boring. Honor was a likable character too, with her weird little Yorkshire terrier Spike (who Tom called Ratty) and her fascination with medical reality shows such as Top Ten Tumors and The Mysterious World of Pork-borne Illnesses and World's Best Impalements.

Which brings me to the humor. If I am to like a romance novel, it can't take itself too seriously, and those written by Kristan Higgins apparently do not. In one scene, her family are all trying wine and noting the subtle flavors of apple, limestone, nesberry, and hay in that pretentious and mysterious way that wine connoisseurs do. Honor's niece Abby pipes up with "I'm getting overtones of fog and unicorn tears....with just a hint of baby's laughter."

As I mentioned earlier, this was the follow-up to The Best Man, which I liked a lot except that the writing was a bit clumsy and juvenile at times. This one was a definite improvement, although there was still an awkward use of stand-ins for swear words, like "fungus" and I think even one "bleeping." I recently heard a podcast interview with Kristan Higgins in which she mentioned how much she swears in her books. There were a few actual swear words in the book, but these weird non-swears were way more noticeable. Maybe the swearing improves in later books.

I will likely continue with this series. (Oh, who am I kidding? I've already requested the next one from the library.) These books are fun and feel indulgent and are very quick to read. Just the perfect thing to sandwich between horror and classics, or whatever you need a bit of a break from.
Posted by 3goodrats at 7:53 AM