Top Ten Most Anticipated Releases for the First Half of 2016 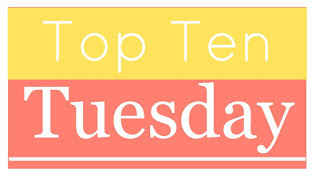 Top Ten Tuesday is hosted over at The Broke and the Bookish. I'm generally too busy trying to catch up with books I want to read that are already published to think a lot about those are forthcoming, but I managed to put together a list. Here are books I'm excited about that are being released in first half of 2016.

1. Wild Swans by Jessica Spotswood
From the author of the Cahill Witch Chronicles, which I loved a whole lot and recommend all the time. Check out my reviews of those books: Born Wicked, Star Cursed, and Sisters' Fate. This is probably my most anticipated new novel right now, and definitely the one I've been excited about for the longest.

2. Expatriates by Janice Y.K. Lee
She wrote The Piano Teacher, which I also loved and recommend all the time. It's about British people in Hong Kong after WWII, and I'm happy to find that this new novel also takes place in Hong Kong. She did such a great job of evoking the sights and sounds of that place and I can't wait to revisit it in her upcoming book. I'm already on hold for it at the library.

3. The Crown by Kiera Cass
I can't wait for the conclusion of this series! The first three books began with The Selection, and then a fourth book, The Heir, jumped ahead 20 years and this final installment will conclude the entire series. These are great to listen to on audio so that's probably how I'll read this one too.

4. The City of Mirrors by Justin Cronin
This will end the trilogy that began with The Passage and continued with The Twelve. There's been a lot of time between each book, which made The Twelve sort of difficult since I couldn't remember as much as I'd like from the first book. I'd love to read them all together again in a row, but will I be able to take that much time from everything else I want to read in order to re-read two really long books? I don't know, but either way I'll definitely be reading this one!

5. The Natural Way of Things by Charlotte Wood
I just read about this one the other day here, and I think it sounds very intriguing! Two women wake up in a strange place and realize they are part of a larger group of women who are being held captive. All they seem to have in common is that they were all involved in public sex scandals. It sounds fascinatingly psychological. Plus I love that cover.

6. Sleeping Giants by Sylvain Neuvel
This novel was mentioned on Books on the Nightstand months ago and I made note of it right away. A girl falls through the earth and lands on what appears to be the palm of a giant metal hand, beginning years of investigation and, apparently, a book series. Goodreads lists this as Themis Files #1. The podcast host who talked about this over the summer was very excited about it and it sounds quite unique.

7. Sweetbitter by Stephanie Danler
Mentioned on the same episode as the book above.  I don't remember what exactly was said about it, but it has something to do with a woman working in a fancy New York restaurant and getting involved with coworkers. I realize that doesn't sound super exciting, but it was a very glowing review that made me want to read it.

8. The A$$i$tant$ by Camille Perri
A woman who works at a huge company discovers a mistake for an amount of money that her boss wouldn't miss, but that could change her life. She takes the money, and soon other underpaid coworkers are coming to her for help. I just received this debut galley and am really looking forward to reading it.

9. Salt to the Sea by Ruta Sepetys
I only just heard of this today when I looked at the Top 10 list on the Broke and Bookish website but had to immediately add it to my list. This author is great! I really liked Between Shades of Gray and Out of the Easy and now I'm looking forward to her newest.

10. We Are the Ants by Shaun David Hutchinson
This galley arrived at my doorstep last week from Simon & Schuster, the same publisher that sent me The Scorpion Rules. This one is from the Simon Pulse imprint which calls itself "daring and edgy" and the book is about alien abductions, the end of the world, and the one teenage boy who can save it. I'm sold.

Those are my ten that I'm anticipating, but I do want to mention two from the first half of the year that I've already read because I'm excited for everyone else to read them. First, American Housewife by Helen Ellis, a collection of darkly comic stories about domestic life. I really enjoyed these stories and have read some positive reviews from other sources as well, so I think a lot of people will like this one. Finally, the new Chris Bohjalian novel, The Guest Room. In this novel a bachelor party goes very wrong, and one family's life collides with the harsh reality of human trafficking. You will not forget this story or these characters for a good long while. I can't wait to hear what others think of this book!

What new books are you anticipating in 2016? Are there any important ones that I've missed?
Posted by 3goodrats at 10:25 AM

I haven't heard of most of your picks, but they sound intriguing. SALT TO THE SEA is excellent. Very vivid and memorable and heart-breaking and yeah, just a good read. I also like Bohjalian. I have an ARC of THE GUEST ROOM on my Kindle, but I haven't gotten to it yet. Hopefully, sometime in 2016 ...

You have some interesting picks here! I'm especially intrigued by the two you already read -- both sound really good. I read "The Passage" back in 2013 (I think) and it ended up being tied for my best read of the year... and then somehow I never picked up "The Twelve." I'm hoping to read books 2 and 3 this year, though. Hopefully I'll remember enough of what happened in "The Passage"!

When you pick up The Twelve, check the back of the book - I seem to remember a list of characters or summary of the first book, I don't recall what, but I just remember thinking I wish I had realized it was there before I started reading. There's also a good summary of The Passage on the wikipedia that helped refresh my memory before I started.

Salt To The Sea was on my list this week too. I've read one of Ruta Sepetys' other books, Between Shades of Grey and I loved it, so I'm really excited to try another one of her books.
My TTT: https://jjbookblog.wordpress.com/2015/12/29/top-ten-tuesday-37/