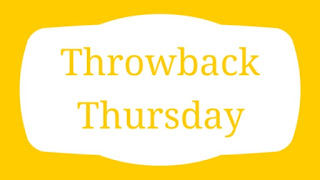 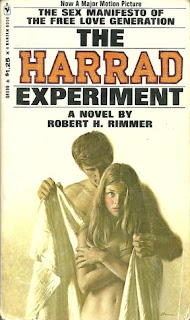 I thought I had already written about this 1960s classic, but through a gross oversight it seems that I haven't. I read it in high school, and my choice was obviously based entirely on the cover. I'm pretty sure I owned my copy, which I must have picked up at a yard sale somewhere because there were no bookstores in my town and my copy was clearly a used one.

The way I remember it, Harrad College was an experimental school where everybody was naked all the time. Based on the cover, the men were all 40 and the women were all 12.

According to Goodreads, though, the college is more about "premarital" living arrangements and free-thinking. Students live with roommates of the opposite sex, with predictable results.

The description of the updated edition promises a "controversial" biography about the author, which enticed me to look up Robert Rimmer. I learned that The Harrad Experiment was made into a movie in 1973, and it is even available to borrow through my library consortium. (One of the actors in this movie is none other than Miami Vice star Don Johnson!) I also learned that Rimmer died in nearby Quincy, MA in 2001 and that he was an alum of Bates College, a nearby rival of my own alma mater. My brief research yielded nothing controversial about him. He wrote a number of books, mostly about unconventional sexual relationships and believed that someday monogamy wouldn't be the only legally sanctioned form of marriage. His wife of 60 years was apparently not a fan of these ideas.
Posted by 3goodrats at 7:30 AM