Act Like It by Lucy Parker (2015), narrated by Billie Fulford-Brown 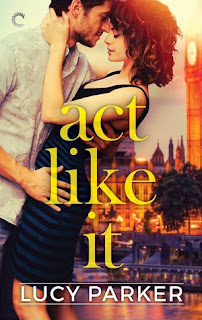 Lainie Graham is the lead in a London play where every night she must kiss her most recent ex-boyfriend on stage. The villain, Richard Troy, is a bad-tempered unlikeable guy but a very talented and well-known actor. The show isn't doing terribly well at the box office though, so the PR people concoct a plan: Lainie and Richard will pretend to be having a relationship, which will help boost ticket sales. This is a romance novel, so you can clearly see where this plan of a faux romance will lead.

This was a great setup: a play in London's West End, actors who don't really like each other but must act as though they do, press coverage of their personal lives causing lots of complications, and a cranky hero who you just know has goodness hidden deep inside him. Richard is not only famous for his acting, but his father was an MP who had died unexpectedly early, and despite his privileged upbringing, Richard's life wasn't easy. Lainie was great too - she was not nearly as well-off as Richard, and was far more likeable as a person. She was pretty witty and, despite being able to make a living as an actress, wasn't rail-thin or glamorous. She was red-headed and top-heavy, which sometimes made dressing difficult. She seems like a regular person, and one you'd want to be friends with.

Social media and gossip played a large part in this novel, which makes sense and added fun complications to the story. Obviously the fake romance between Lainie and Richard was covered in the press, as was the intention, but there were also some unforeseen news items that affected their burgeoning relationship. We see this a lot from afar in the real world, but I liked this close-up examination of how it actually can affect people.

Humor was also an important and appealing part of the book, mostly on Lainie's part. She was cat-sitting for her landlady and I loved the scene in which Richard was driving her and she made him stop so she could feed Cat Richard. The cat's name was Richard, but Lainie always referred to him as Cat Richard, I guess to differentiate from Human Richard. When Richard saw the cat he immediately asked "What the fuck is wrong with its face?" It's a smush-face grumpy-cat type of feline, and Lainie immediately held the cat up near Richard and proclaimed "Twinsies!" Human Richard was not amused. But what can you expect from a guy who doesn't like cake? (Seriously, he doesn't like cake!) In another scene at a dinner party, after dinner the group split up and went to separate areas, divided by gender "...because apparently this was Downton Abbey." Lainie was positively full of wry observations, and totally the sort of person I want to hang out with.

Although all the right elements were there, I never quite got the swoonies during this story and with romance I need me some swoonies. I have no criticisms about the story at all - the plot, characters, and setting should have all added up to a great romance. I think maybe this is one I should have read in print. The audio version was great though - the narrator read it with well-accented and deftly-delivered humor. I think maybe I just wasn't able to focus enough for some reason and didn't get into it as I should have been able to. I liked it well enough, and I think if you're interested in contemporary romance this short-ish novel would be a great pick. It's pretty flawless as far as I can tell and I think my experience wasn't any fault of the author or narrator.
Posted by 3goodrats at 7:30 AM