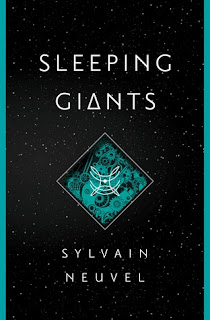 A little girl named Rose is out riding her new bike near her home in South Dakota, when she suddenly falls into a hole. When she is found, she's laying in the palm of a giant hand. Years later that little girl is a physicist and she once again crosses paths with the giant hand. The mystery of its origin and purpose are still unresolved, but it is Rose who finally helps unlock its secrets.

I don't want to give away much more about the plot, because all the fun of this book is uncovering the story bit by bit as you go along. Dr. Rose Franklin is part of a team that also includes Kara, an Army helicopter pilot, her co-pilot Ryan, and Vincent, a graduate student in linguistics. The story is told mostly through interviews with these and other characters, as well as some journals and logs and news reports. The conversations are all with an unnamed interviewer who clearly has a ton of power, and presumably a lot of information that he's not sharing with his interviewees. This means that the reader is also kept quite in the dark about what is going on. We're not privy to the action exactly, but often are getting a debriefing afterward. It's an interesting narrative choice, but I think it works pretty well here.

The story is big, and tied into some larger mythology, and global repercussions. But it's also about people working together in very intense circumstances and how that affects them. It's very difficult to talk about without giving away things that you'll want to discover for yourself if you read it! The chapters are all very short which, combined with the interview format, makes it pretty quick to read.

I've been waiting for this book for about a year. I first heard about it on the now-defunct Books on the Nightstand podcast, and the host's response to reading an early manuscript was so enthusiastic that I remembered it until it was finally published just recently. It turns out that it's the first in a series (#2 is expected in 2017), but it didn't leave me hanging. I still have questions and feel like there's a lot more to discover, but I do feel like the story was complete enough to be satisfying.

I want to compare this novel to The Martian, not because it actually has anything in common with it, but because I think it's similarly accessible to non-science fiction readers. It's not nearly as dense as a lot of science fiction and although it definitely contains science, it's not difficult for regular people to understand. But it definitely involves some important scifi elements, and it's just a fun book to read. Recommended!
Posted by 3goodrats at 4:23 PM