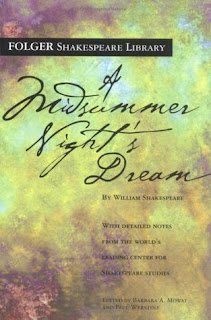 This is the fourth and final play I've read for the Bardathon Challenge. I read the tragedies Macbeth and Hamlet, and the two comedies I chose to read are Much Ado About Nothing and now A Midsummer Night's Dream.

This play is about the entanglement of four lovers: Hermia, Lysander, Demetrius, and Helena. Lysander and Demetrius both want to marry Hermia, and her father wants her to marry Demetrius, but she loves Lysander. Helena loves Demetrius, but he doesn't care about her. The king and queen of the Fairies, Oberon and Titania are having their own domestic dispute and when Oberon employs Robin Goodfellow to cast a spell on Titania, he also asks him to cast a spell on Demetrius to make him fall in love with the first woman he sees, which should be Helena. Robin mistakes Lysander for Demetrius and all of a sudden everyone is in love with Helena and an unfortunate weaver/actor named Bottom now has the head of an ass. Hilarity ensues.

As with the other Shakespeare plays I've read this year, A Midsummer Night's Dream is light on plot and character development. It's a silly story and I kept getting the characters mixed up, but it was rather funny. I recognized a famous quote, which is always satisfying: "The course of true love never did run smooth." Also satisfying were the insults:

"Hang off, thou cat, though burr! Vile thing, let loose,
Or I will shake thee from me like a serpent!"

This is a play I would really like to see performed because the magical elements, the woods and the fairies, really lend itself to nice stage designs and costumes. Indeed I've heard that it's quite good to see, and managed to miss a local performance in the spring because I didn't know about it until the last minute.

All I have left for this challenge is to see a play performed, which will hopefully happen this summer. But I'm done with the reading portion of the challenge. As it turns out, I'm pretty much doing this one on my own, just like my TBR Pile Challenge, because the person who was supposed to be sponsoring the Bardathon seems to have stopped participating. But I wasn't doing it for the glory or the prizes anyhow, it was just a way to make myself finally read some Shakespeare. Mission accomplished!
Posted by 3goodrats at 7:30 AM