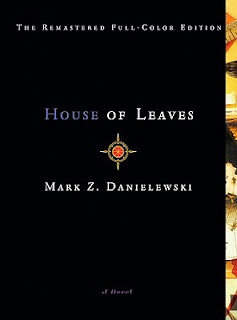 This strange novel is a book within a book, and within the inner book is a documentary. The subject of the documentary is a house that's bigger on the inside, and the story of one family who was unfortunate enough to move into the house. But maybe I should back up a bit. The story is about a guy named Johnny Truant who stumbles upon an immense collection of writings by a dead guy named Zampano who was writing a book about a documentary called The Navidson Record. As Johnny puts together all the bits of writing, along with footnotes, appendices, and other periphery material he is drawn into a dark descent paralleling the Navidson family who made a documentary about their strange and otherworldly house. Are you confused yet? If not, then I'm not describing this accurately, but that's the best I can do.

House of Leaves has been on my to-read list for years. It's not widely known but has a cult following and every now and then I'll read some mention of it or see it listed among somebody's favorite horror novels. I'm glad I finally got to it, though I didn't find it as earth-shattering as some people have.

Because the bulk of the book is describing a documentary it seems in a way more real. It's an interesting device. On the other hand, because Karen and Will Navidson are just characters in a documentary that is being described, they remain distant. Also contributing to this are the many extensive footnotes and quotes from scholarly sources (which of course are fake.) Again, it makes it seem more real in a way, but distant and clinical, so it wasn't as scary as if you were hearing the story first hand and had access to the characters' thoughts.

Although my edition is 700 pages, the main part is really only about 530. The rest is appendices (and even an index, which I actually used at least once) and I read some of the material in the appendices but not all. There's a lengthy selection of letters to Johnny Truant from his mother, which I mostly read, and a lot of poetry that I skipped, mostly because I don't know why it's there or who supposedly wrote it.

Of that 530 pages, a lot of it is taken up by footnotes, or weirdness like mostly blank pages with just a few words in the center. Or not the center. The text is frequently arranged quite creatively. I sort of liked that, though I'm not sure I understand the significance of those arrangements. It was the footnotes and quotes from scholarly sources (or celebrities) that made it start feeling very encumbered. All the extraneous matter serves to illustrate how much The Navidson Record became a part of popular and academic culture, but reading through it was sometimes cumbersome. I think you could skip most of that and just read the main text and just the footnotes that make up Johnny Truant's story, which is almost a novel in itself.

I'm glad I finally read House of Leaves, but it didn't quite live up to the hype for me. I kept hearing that it was terrifying, but didn't find it so. Conceptually, it is creepy and mysterious, but the devices Danielewski used to make the story more believable lessened the potential to be scary to me.
Posted by 3goodrats at 8:29 AM