A Breach of Promise 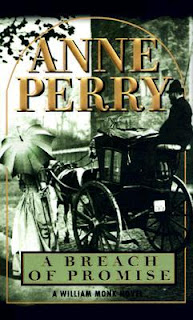 Oliver Rathbone is employed to defend a young architect in a breach of promise suit. Killian Melville is accused of backing out of his plans to marry Zillah Lambert, but he says he never proposed to her in the first place. Rathbone considers it a hopeless case; not only is it hard to defend someone for allowing plans to go so far without clearing up the misunderstanding, but he also doesn't understand why Melville is so dead set against marrying Zillah in the first place. He knows there's more to the case than this, but Melville refuses to reveal all. Rathbone employs William Monk to help him find out as much as possible about the family to help his case.

Meanwhile, Hester Latterly is nursing a returned soldier who has been grievously injured. Employed in the household is a woman who is interested in finding her two disfigured nieces who she lost track of years ago after her brother's death. She implores the visiting Monk to help her find them, and he agrees to take on what he sees as a hopeless case. Predictably, the two cases end up converging.

I thought I had the breach of promise case all figured out early on, but I was pleasantly surprised with how wrong I was. There was a twist that I didn't see coming at all! The plot is more complex than in the past books of this series. In fact, a lot of things came up in the end that would have resulted in another whole court case. I think we are left to assume that it was tied up neatly, but man, I wanted to see it happen. It was only very loosely related to the original case but was really very interesting. I wish the resolution of the original case had led into another book about this other case. But alas, the next book is something different entirely. It's strange how oddly rushed and incomplete the ending felt.

This is also a pivotal book for the long-coming romance between Monk and Hester. Unfortunately, it was just thrown with all the other wrapping-up that happened in a rush at the end. I've been waiting patiently since book one for them to recognize their affection for each other, so I was satisfied that it finally happened.

In many ways the books in this series are all the same. The same sorts of people appear over and over, Monk and Hester have the same sorts of conversations and arguments. They are also a little too accepting of things like homosexuality and women's rights considering the time in which they live (which I'm fine with, as it makes them more likable to me.) But these books are such comfort reads! Here in the Boston area last week, that was exactly what I wanted. I was far too distracted by the events surrounding the Marathon bombing to read anything else and was very glad to have this paperback on my shelf when I most needed it.

Despite my criticisms of the ending, I think the plots were among the most interesting and compelling of the series so far. As a side note, I don't think I ever notice the covers on these books - I can't even think what any of the others look like - but I really like this one. Something about the black and white photo, especially the lady with her umbrella, appeals to me. I'm looking forward to continuing on to the next book in the series!