The Yonahlossee Riding Camp for Girls

The Yonahlossee Riding Camp for Girls by Anton DiSclafani (2013) 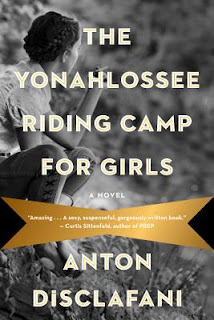 It is 1930 and Thea Atwell has done something terrible. So terrible that she will not reveal what it was, but as a consequence she has been sent away to the Yonahlossee Riding Camp, an equestrian boarding school for young ladies of good breeding. It doesn't sound like much of a punishment - especially for someone who loves horses as much as Thea does - but she has spent her whole life isolated with only her family as company. Growing up in Florida, Thea's only companions were her twin brother Sam and her cousin Georgie. After arriving at Yonahlossee in North Carolina she must suddenly adjust to interacting with other teenage girls. But she is still haunted by the sins of her past, and only seems doomed to repeat them.

Thea is reckless and impulsive, and cared little about others' feelings. I know she's only 15 so it's believable, but it was tough to like her. Thea was emotionally distant. It's difficult, in a coming-of-age novel, to sympathize with a protagonist who you don't really know. The secrecy surrounding the terrible thing she did means that we can't really get inside her head and understand her motivations because we don't really know what she's been through. I suppose she grew and changed a bit in the novel, but it's hard to tell because her inner life is so masked. I'm troubled by the fact that she also seems to be making a similar mistake at Yonahlossee, and why would she repeat the very sort of thing that got her sent there in the first place? And without regard to the implications or consequences, when the result of her last mistake was so dire?

The big secret is eventually revealed through a series of flashbacks that slow work forward towards her departure for Yonahlossee. Unfortunately, it was mentioned way too often, with many references to the horrible thing she had done, her terrible secret, etc. It wasn't difficult to figure out what it was, so when it was finally revealed there wasn't much surprise.

The novel revolved a great deal around Thea's burgeoning sexuality, and I found her escapades a bit...icky. Now mind you, I have read everything from Flowers in the Attic to The Story of O without it bothering me - I'm not squeamish about these matters - but I had a hard time reading about some of her inappropriate shenanigans. This involved a man twice her age, though until his age was mentioned late in the book I thought he was much older. Perhaps it was his age that squicked me out, or maybe that combined with the level of detail about their encounters. Either way, it was pretty central to the novel and cast a smarmy light over the whole thing.

But there were some great aspects to the story as well. Thea's family lived in central Florida on a huge piece of land with only their closest relatives, and they hardly even knew any other people. The riding camp/school was another isolated little microcosm - it felt like the novel just moved from one little bubble to another, barely touched by the outside world, and it gave them each an otherworldly feel. Yonahlossee was a fascinating little school, full of traditions and history and a population of girls both mysterious and slightly sinister. Of course it was 1930 and lives were touched by the Depression, which did affect Thea's family and her friends at school in some ways. The best and most heartbreaking part of the novel was Thea's relationship to her twin brother Sam. I really liked reading about him and wish he appeared more.

Many pre-pub reviews are fairly glowing, but I was only able to give it 3 stars on Goodreads and just barely. It wasn't badly written and I can see why others would like it, but Thea was too much of a mystery for me to be truly engaged in her story.

I received my copy of The Yonahlossee Riding Camp for Girls as part of Penguin First Flights. It will be published in June.
Posted by 3goodrats at 11:28 AM