Last week I was catching up on posts from the Yarn Harlot, and came across an interesting discussion about how much should be explained in patterns. It began when Stephanie was knitting late at night and came across this instruction in a pattern: "Reverse shapings to match other side." She tweeted that it was a bad instruction for so late in the evening, which generated a huge discussion about how specific patterns should be. YH was quick to point out that she had only been commenting that it was time for her to put down her project and go to bed, but thought in fact that it's ok for designers to assume a certain level of skills on the part of the knitter. 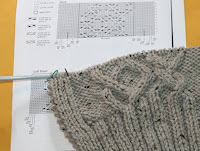 Although the Yarn Harlot concluded that it's just a matter of personal preference, I keep thinking about it and I'm not so sure. I think there's a big difference between the parts of a pattern that you can look up and figure out how to do, and the parts that can only be figured out if you know what's in the designer's mind.

For instance, if a pattern says to use a provisional cast-on, you can look up "provisional cast-on" because it has a name and requires a specific set of steps. Same goes for k2g, kitchener stitch, Dutch heel and so on. Even if a technique has more than one name, it is still the same thing and if occasionally there's more than one way to do it, it will presumably produce a very similar result.

If, however, the pattern says something like "reverse shaping" things get a little unclear. Which parts exactly do you reverse? I once made a cardigan front and for the other front the directions said something like "do all that, but in the opposite way." For the designer, it may seem obvious what that specifically means, but for a knitter who hasn't made that exact pattern before, it may not be. What exactly do I do the opposite way? Do I use ssk instead of k2tog? Decrease on the ends of the rows instead of the beginnings? On the other piece I decreased on the right side, so now do I do it on the wrong side? For that matter, do I increase instead of decrease? Ok, that's getting a bit ludicrous maybe, but it illustrates my point. Add in a cable or lace chart, or maybe some colorwork, and the waters become even more muddied. 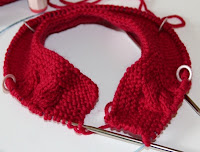 Just a day or two after I began thinking about this, I received a message on Ravelry from a knitter who is working on the Cabled Baby Raglan and knit the first 4 rows, coming to the instructions "continue in pattern." She understandably had some questions, as 4 rows is hardly enough to establish a pattern. In fact, last summer when I made this garment, I ended up ripping back and starting again because I incorrectly interpreted that very part of the instructions. And I'm a fairly seasoned knitter who has read a lot of patterns, some of which were quite complicated. I realize that patterns are edited for brevity so they try not to be too wordy, but we need those words. They tell us what to do.

Knitters, what do you think? Am I expecting too much of pattern designers? Have you run into roadblocks because of vague instructions?
Posted by 3goodrats at 1:05 PM