The Movement of Stars 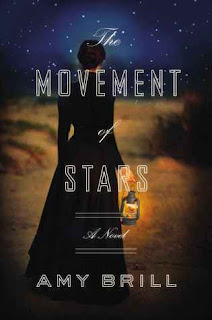 Hannah Price is a young quaker who lives on the island of Nantucket with her father and twin brother. She has ambitions to be an astronomer, but it is 1845 and there are no women's colleges with astronomy programs. Still, even without a formal education her father and her teacher have both taught her well and she continues to watch the stars every night in hopes of a discovery that will make her name. One day she is approached by a black man named Isaac Martin, who is hungry for knowledge and also excluded from formal education. Hannah takes him on a student, but as their friendship develops she becomes the object of scandal and tries to reconcile what her heart is telling her with what her community will accept.

The intriguing premise of this book appealed to me for similar reasons as A Study in Seduction, but held more promise than a paperback romance could. The novel is based on real-life astronomer Maria Mitchell, though a great deal has been added and embellished. Plus, I like that it is set locally - New England books always hold a special appeal.

Brill's writing is eloquent and strong, keeping me engrossed throughout the almost 400 pages. The astronomy was kept fairly basic, so as not to scare off us non-scientists, but still lending an air of the excitement of anticipating a discovery. Hannah also had a job as a junior librarian at the Athenaeum, a membership library that sounded like a stately and beautiful building. No wonder Hannah enjoyed her job there so much. Hannah's family members, the various townspeople, and especially Isaac Martin, were fairly well fleshed-out and appealing.

I struggled to figure Hannah out a lot of the time. A Quaker, she was allegedly devoted to Meeting but seemed very surprised when tongues began wagging about her running around town in the middle of the night with a black man. Even though it was innocent, surely she must have known how it would appear. At the same time, she was quite judgmental about other women of her acquaintance, like her brother's fiance. She didn't even give them a chance and I couldn't understand why she dismissed them so quickly. Partway through, I began to really dislike her. But later I began to sympathize with her again and found her much easier to relate to. This uneven character development was troubling.

Still, on the whole it's an enjoyable novel that was a pleasure to read and even spurred me to check out a beginning book on astronomy from the library. I think it will appeal to those who like New England historical novels with ambitious female characters. The Movement of Stars will be published on April 18.

I received The Movement of Stars as part of Penguin's First Flights Program.
Posted by 3goodrats at 9:30 AM