This may come as a shock to anyone who remembers how much I dislike knitting scarves, but since my rather gluttenous trip to Windsor Button not long ago, I've been compulsively knitting this scarf. 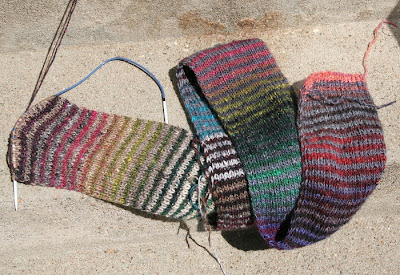 Compulsively. On the bus, while watching Dr. Who, while sitting and thinking about the other things I should be doing.

It's a simple 1x1 rib, striping every two rows. I'm using 3 colorways as the pattern recommends - I'm not sure why it recommends 3 colorways, but I couldn't find two balls of one neutral-ish colorway as I wanted to so it worked out that way anyhow. It's one colorway throughout the entire scarf, and then the more neutral one switches off halfway through to the other neutral colorway. I thought it would be less noticeable, but the neutrals are more different from each other than I thought. Well, I still like it.

It got a little dodgy around this part. 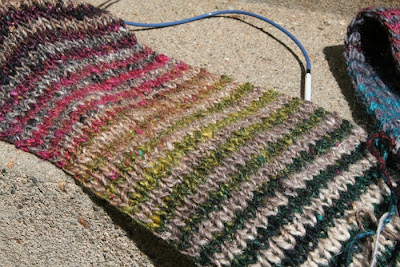 The yellow and tan combined in a most unflattering way, but luckily it all turned pink and grey again before things went too badly.

The beautiful and ever-changing colors are what make the knitting a pleasure, but probably the most important thing is how wonderful this yarn feels. Yes, I'm talking about Noro here, notorious for being scratchy, not to mention full of bits of twigs and whatnot. I kind of like finding those. (Not so much the knots, but I've only found one knot mid-skein so far, knock on wood.)

Noro Silk Garden, I should have bought you long ago, rather than just staring wistfully at you for so many years!
Posted by 3goodrats at 10:00 AM