Far From the Tree

Far From the Tree: Parents, Children, and the Search for Identity by Andrew Solomon (2012) 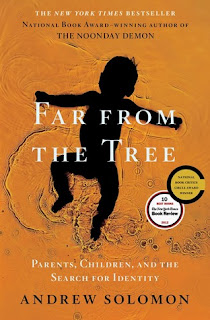 Andrew Solomon's new book examines horizontal identities - those foreign to one's parents and which require identity from a peer group. He examines a variety of horizontal identities and posits that our strength as a society comes from this diversity, and that living with someone who is different from you in fundamental ways fosters empathy and tolerance. In the first chapter (entitled "Son") he lays out his assertions along with a story of his own horizontal identity (he is gay), and then explores a different one in each of the following chapters: "Deaf", "Dwarfs", "Down Syndrome", "Autism", "Schizophrenia", "Disability", "Prodigies", "Rape", "Crime", "Transgender", ending with a chapter called "Father," in which he sums up his research and discusses his own experience becoming a parent.

Far From the Tree has been incredibly popular since it was published just a few months ago, surprising not because of the subject matter but because of the length. I never thought I'd pick up a 900+ page nonfiction book, much less finish it. I wasn't even very interested in reading it until I read this review, in which the reviewer says that a) the world would be a better place if everyone read this book and b) you really only need to read the first 48 pages to get the idea. "Well," I thought, "I can read 48 pages." The thing is, it's really hard to stop there, because while you've gotten the author's main idea, you haven't even gotten to the good stuff yet. (Also, the last 200 or so pages are notes and an index, so the book is really only 700 pages.)

The most interesting chapters for me were the ones that dealt with various types of disabilities. Some of the parents, even of extremely disabled children, insisted that they wouldn't change anything if they could, and there were times when I found it difficult to believe they really felt that way. A couple of parents of severely disabled children admitted they wished their children weren't disabled and said parents who say differently are lying. Parents of a child with Down Syndrome said if they could wave a magic wand and make him normal they would. Life is hard for him. But for themselves, they wouldn't change a thing because it's made them who they are, and they are better than would have been otherwise. These parents greatly differed from those who found such strength in their identities, and expressed outrage at cures or prevention. And that is what's most fascinating about the book I think, and its greatest strength - the many different perspectives and opposing viewpoints from people dealing with the same challenges.

It wasn't all about disabilities though. The chapters on the mentally ill, children born of rape, those who are drawn to crime, and transgender children offered insights on other types of horizontal identities. I'll admit I got a little bogged down about halfway through when I hit the chapter on musical prodigies. I understand why it was included, how genius can alienate just as much as disability, but I just found the subject boring. The "Transgender" chapter surprised me because the experience has been described very differently elsewhere. Here, gender seemed to be defined by trappings like clothing and toys and certain colors, which are all social constructs. Previously I've heard the transgender experience compared to body dysmorphia, which makes a lot to more sense to me (though obviously that doesn't mean it's more accurate.)

One of the most touching parts of the book was in the "Crime" chapter when Solomon visited with Dylan Klebold's parents and found them an easy and wonderful family to spend time with. The visit raised more questions than it answered, but I was glad it was included. In fact, you could say the entire book raised more questions than it answered. (It would be fantastic for a book group, if you can convince other people to read such a lengthy tome) In his ten years of research, Solomon encountered and explored many other issues and identities he was unable to include. He also interviewed parents of children who were obese, had addictions, dyslexia, AIDS, cancer, or were religious fundamentalists, supermodels, or bullies. These could be fascinating as well. But I suppose in terms of his premise, it all boils down to the same thing - these people are different from their families and that experience is one of both challenge and growth.

Not being a parent myself, I have no insight into the experiences of parenting any kind of child. But the interviews and Solomon's own experiences as a parent were described in a way that made it easier to understand and believe. (Honestly though, if I was in any way tempted to change my mind and have a kid, reading this would have quashed that urge.) Even if you're not a parent, you have likely been part of a family, and can therefore relate to - and learn something from - some aspect of this book.

There is so much to say about this book, and indeed I've been talking about it to anyone who will listen. I wish I had read it for a book group, because I really would like to sit down with people who have also read it and discuss it extensively. It's incredibly fascinating, there's a lot to learn, and I think everyone can relate to some aspect of it since we all know someone who fits into one of these categories. I do recommend the first chapter as it lays out his premise and background for the book, but then you could easily just read the chapters that interest you and leave the rest. Don't be daunted by the length, as I was -I highly recommend giving it a try.
Posted by 3goodrats at 7:15 PM

If you can keep it fresh in your mind for the next week or two, I'd be happy to discuss! Just started reading.