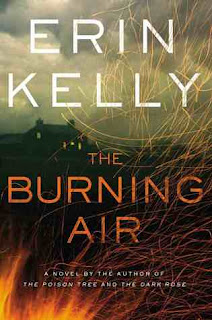 Darcy Kellaway was denied a scholarship place at the elite school headed by Rowan MacBride and vowed revenge upon the MacBride family. Years later, as Lydia MacBride faces her own mortality, she considers the greatest regrets of her life, which she has kept secret from her family. After her death, the family gathers at a country house called the Far Barn. But there is a newcomer in their midst, one who threatens the family in a way they are completely unprepared for.

I read The Burning Air based on a starred review that compared it to Gone Girl. It's not like that book exactly, but has a similarly dark psychological mess, with twists. Revenge is a fascinating (and pretty foreign) concept to me. It's oddly enjoyable to watch someone plan payback over the course of years, the vindictiveness eating away at their life.

The MacBrides were a fairly typical middle class family, the sort you could find in any book of domestic fiction. Because of Rowan's position, all his kids received a private education (though this is in England, so it's called "public"), and none of them truly appreciate what they've been given both in education and in terms of their supportive family. They're not bad people, just not especially interesting.

I'd love to talk about Darcy Kellaway, but honestly the less said about that character, the better. Trust me. That is someone you need to get to know over the course of reading this novel.

The ending was a little unsatisfying and I have mixed feelings about it. But I suppose there are never good ways out of these situations, so I'll take it. Last weekend I was sick and did a ton of reading (hence the 3 reviews this week), and I managed to read this in just over 24 hours. It was so gripping it would have been a quick read under any circumstances. If you like crime or psychological fiction I highly recommend it.
Posted by 3goodrats at 2:04 PM