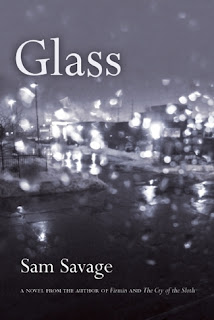 Edna writes about her late husband Clarence, and about herself, and about the various interruptions that occur during all this writing. Her downstairs neighbor has left her to care for her plants, fish, and rat and Edna struggles in vain to keep them all alive while still putting many hours towards her work. Well, not her work exactly, because Edna hasn't gone to her job for a while now, for unspecified reasons. Her work now is her writing, which she refers to not as writing but typing. It seems that Edna types everything that flits through her disordered mind.

Glass is just one long monologue from a narrator who can't possibly be reliable, but is still irresistible. Her stream of consciousness meanders through her childhood and her marriage, revealing bits of her life and thoughts in a nonlinear fashion. There must be a method to her madness though, because it was easy to follow her strange train of thought back and forth through the past and present.

I liked Edna's voice a lot and have gone back to re-read parts I especially liked, such as this line about her mysterious return to writing: "One day I am staring out the window or quietly eating oatmeal at my table or, as I mentioned, weeping, and the next day I am typing." Her thoughts will turn suddenly from one thing to another, like when she discovers one of her neighbors' fish dead and, without even a paragraph break, begins talking about her father's death. Frequently it will be completely unrelated, like when she was thinking about a man who had just been killed in an explosion and suddenly interjects, "Nigel won't stop squeaking his wheel, despite my shouts." Nigel being the rat, of course.

For the most part Edna is unsentimental. "I imagine some people will prefer that I say something on the order of Clarence was the love of my life. I could just as well say that he was the boredom of my life, the annoyance of my life, the chief obstacle to higher things of my life, and so forth." Their marriage was indeed troubled, which we can gather from the fragmented story of Clarence's relationship with another women and Edna's time away at a place she refers only to as "Potopotawoc" which I think must be some sort of camp for the mentally ill. Leaving out so many important details makes it difficult to piece together the story of her life properly and many holes are left.

Yet she will now and then philosophize about something seemingly trivial. She once traveled through Europe on a train, waking up to find that to her surprise she was passing through Switzerland. Although sleeping through Switzerland is no different from sleeping through France she wonders "if the important thing is what actually happened in the past or only what we remember having happened." And the knowledge that she was in Switzerland may have changed her life in some minute way, but wouldn't it have changed in the same way if she misread the sign and only thought she was in Switzerland? (This can probably apply to many stories from her life!) But this is why I liked Edna so much - with all the wildly disparate things running through her head, it was impossible to predict which one she'd get hung up on and ruminate about for a page or so, and which she'd just gloss over in passing.

Like Savage's other books (Firmin and The Cry of the Sloth), Glass is short at 223 pages. Savage's writing is tight, colorful, and - even in a stream of consciousness book that's light on plot - concise. No matter how troubled, or even unlikable, his characters are, I always enjoys their perspectives. I'm looking forward to his newly-released novel, The Way of the Dog. If his other books are anything to go by, it's sure to be fantastic.
Posted by 3goodrats at 9:30 AM