Half of a Yellow Sun

Half of a Yellow Sun by Chimamanda Ngozi Adichie (2006) 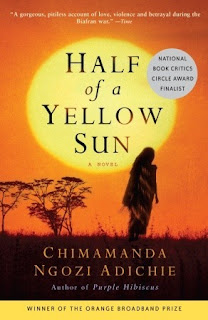 In the 1960s part of Nigeria fought to establish the independent republic of Biafra. Caught up in this revolutionary time is young Ugwu, a 13-year-old boy who knows nothing about politics until he goes to work as a houseboy for a university professor. The professor's girlfriend Olanna is our second protagonist. The third is Olanna's sister's boyfriend Richard, a shy and soft-spoke man from England. Through these three characters, Adichie shares the story of what it was like to be in Nigeria during this turbulent part of history.

Ugwu was concerned more about getting the opportunity to touch a neighbor's breasts than anything important going on in his country, proving that teenage boys are pretty much the same everywhere. He was from a small village, though adapted well to living in his master's nice home surrounded by educated, cultured people. As the novel spanned several years we saw him grow up a bit, but in a lot of ways he remained rather simple. He generally did what was expected of him and when he made his own decisions, he didn't have the best judgment.

When his master told him of the imminent arrival of his girlfriend, Ugwu dreaded meeting her but he was quickly enamored of Olanna and she became quite protective of him. Olanna was beautiful and from a good family, though her relationship with her twin sister was rocky. Although set against a backdrop of political change, the interpersonal relationships between the sisters and their boyfriends, with all the accompanying tensions and betrayals, provided much of the compelling force of the novel.

The third protagonist, Richard, was from England but trying to make a home in Nigeria while writing about the country and its art. His attempts were mostly frustrated though; he wrote in fits and stops, never quite able to latch onto a good idea. He learned to speak the local language, Igbo, and when Biafra was born he considered himself Biafran as he was there during its formation. Of course, to the locals he was and would always be a white outsider.

I didn't know what to expect from this novel. Part of the reason I chose it is because I know so little about Nigeria (or any African country really) but it is currently one of just a few countries with a flourishing economy right now. Although I was interested in its history, I worried that the book would be dense. I had nothing to fear, because I easily flew through the more than 500 pages of compelling story about unforgettable characters. Adichie brought 1960s Nigeria alive with wonderful details about not just the political situation, but aspects of everyday life such as food, clothing and music.

Now I understand why her new novel, Americanah, is so eagerly anticipated. Although I heard of Half of a Yellow Sun several years ago and kept meaning to try it, reading her short story "Ceiling" not long ago spurred me to finally pick it up, along with my newfound interest in Nigeria. Now I can't wait to read everything else she's written.
Posted by 3goodrats at 4:02 PM

I'm glad you loved it! I read this book a few years ago and since then have read everything she's written and am eagerly awaiting the new title! You should try Purple Hibiscus next...

Purple Hibiscus is exactly the one I was thinking of reading next - thanks!