Firmin: Adventures of a Metropolitan Lowlife by Sam Savage (2006) 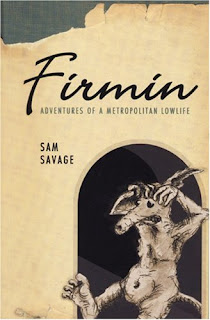 Firmin begins his story by quoting the opening line of The Good Soldier by Ford Maddox Ford: "This is the saddest story I have ever heard." This is my second time reading Firmin's story and it's still one of the saddest books I've ever read. But in a good way, a way that makes me smile often and wonder why nobody else seems to love this book the way I do.

Firmin is born in a bookstore, part of a litter of 13 rats. He was the runt, always having to wait until his siblings finished eating before he could have access to his mother. One day though, his mother went out and didn't come back, and Firmin was pretty much on his own. The litter split up, but Firmin stayed in the book shop where he learned to read and this soon separated him from other rats forever. He identifies more with humans, but to them he is just a rat like any other rat. His attempts at befriending the bookshop owner backfire, but eventually Firmin is taken in by a failed science fiction writer named Jerry who never really understands Firmin, but is still willing to be a friend.

Firmin is quite possibly my favorite literary character. Rats are misunderstood creatures to start with, and Firmin is even more so because he's not a typical rat. All he wants is for humans to accept him and be his friends, but they have no idea what he's like. He can understand them, but they can't understand him. Firmin sees beauty in everything, sees good in the most unlikely people. Jerry is one small step away from homeless, a heavy drinker full of crazy ideas, but Firmin thinks he's the smartest man in the world and loves him because he's so kind and generous and is willing to be his friend. Firmin really thought of them as a pair. When describing their dinners together he said, "Our favorite was Dinty Moore beef stew." Then he mentions they would just eat rice and soy sauce "when we were short on cash" as if he normally brought cash home as well. The way Firmin viewed their relationship was just so touching. Even though Jerry didn't understand the extent of Firmin's intelligence, he appreciated how different he was. When a friend asked if Firmin was tame, Jerry answered "No, man, he's not tame - he's civilized."

At one point in the story, Firmin is so desperate to communicate with humans that he tries learning sign language from a book he finds in the book shop. Of course he doesn't have the manual dexterity of a human, so he decides to just learn a couple of the simplest signs and even if it doesn't make sense it will at least show people that he can communicate. The phrase he learns is "goodbye zipper." He goes to a park and dashes out in front of some women and signs "goodbye zipper" repeatedly and violently, squeaking loudly to punctuate his effort. This is followed by a great deal of screaming and a whack from a stick, leaving Firmin injured. "Goodbye zipper" became shorthand for communicating and he occasionally would say that he had met someone who didn't seem especially friendly so he didn't bother saying goodbye zipper. Somehow I found this all very adorable and heartbreaking at the same time.

Early in the book Firmin says "If there is one thing a literary education is good for it is to fill you with a sense of doom." Firmin's story is certainly short and filled with heartache, yet it is told incredibly well and despite the sadness it's one of the very few books I will re-read. This was my second time, but surely not my last. Sam Savage writes so consistently well I wish he was better known and admired. His books are unusual, which may be why he's less popular, but also why I count him among my very favorite writers.
Posted by 3goodrats at 8:37 AM