The Light in the Ruins

The Light in the Ruins by Chris Bohjalian (2013) 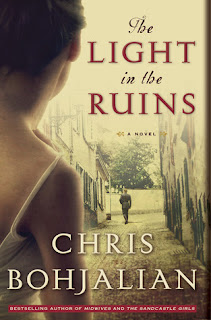 1943. Outside of a small Italian village, the Rosati family goes about their daily lives as war rages on not far away. When two soldiers arrive wanting to see an ancient Etruscan tomb site nearby, their isolation from the war is suddenly, irrevocably shattered. 1955. Francesca Rosati has been murdered at her vanity, her heart ripped from her chest. Investigator Serafina Bettini is soon convinced the reason the Rosati family is targeted is somehow related to the war. As she delves into their history, it begins to converge with her own, awakening long-buried memories.

Moving back and forth between the two time periods, the story is filled with moral ambiguity and highlights the choices people are forced to make in times of war, and the sometimes catastrophic repercussions. Most notable is the relationship between the Italians and Germans, ostensibly allies but their relationship fraught with tension, including partisans fighting openly against German occupation. On a smaller scale, similar tensions formed in the Rosati family as eighteen-year-old Christina falls in love with a German soldier.

Cristina and Serafina are the primary characters, though not necessarily the most interesting ones to me. Serafina was terribly scarred from her time fighting with a band of partisans during the war, her disfigurements alluded to almost constantly, her story slowly revealed through the novel. Cristina's was a coming-of-age story, her loss of innocence fairly typical of war stories, but even darker because of her family's relationship with the Nazis. But the story that most interested me was that of Francesca Rosati, murdered in the opening pages of the novel. A Rosati only by marriage, she arguably lost more during the war than any of the other surviving family members. But what I liked most about her was that she was such an imperfect character in ways that made her seem more real than any other person in the book. Her personality grated, even before the wartime losses, and she was not a very well-liked person. However, it wasn't because of any real flaw in her character, more of an abrasive stand-offishness that only increased after the war. I felt bad for Francesca who was undeservedly punished more than anyone in the Rosati family and she wasn't even really one of them.

I had a tough time getting into this book at first, a combination of the languorous pacing and my resistance to reading more WWII-era literature. I just feel like I've read so many stories set in that period. But amazingly, authors keep finding unique stories to tell about that war (see also Code Name Verity.) About halfway through it picked up a lot and I became quite engrossed. This troubled relationship between the Italians and Germans is one I haven't seen explored much in fiction before, and telling it through the experiences of the Rosati family was mostly successful. The mystery of who is killing the Rosatis felt somehow less important than the story surrounding it, even though it was directly related. Although I didn't love it as much as last summer's The Sandcastle Girls, I found The Light in the Ruins ultimately a strong historical novel.
Posted by 3goodrats at 9:41 AM