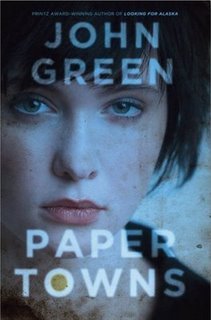 Quentin grew up next door to a girl named Margo Roth Spiegelman and has always had a huge crush on her. Maybe obsession would be a better word. Margo is a wild and adventurous spirit, who has run away more than once and is notorious for her escapades. One night she comes next door and sneaks into Quentin's bedroom inviting him on an adventure to take revenge on several people who have wronged her. The next day, Quentin learns that Margo has disappeared again, but this time he is convinced she has left clues to help him find her, and he is determined to do just that.

I didn't really like Margo Roth Spiegelman very much. She kept pulling outlandish stunts to get everybody's attention and running away when she knew everyone would be trying to hunt her down. It was like she wanted everyone's lives to revolve around her, and she too interested in her own antics to pay attention to what was going on with anybody else. You could argue that she really did just want to get away, or that her pranks were more about revenge than attention, but she still came across to me as very self-centered. On the other hand, I empathized a bit because her parents really didn't seem to care about her so I could sort of understand why she would behave this way.

But mostly this story wasn't about her anyway. The characters we really got to know were Quentin and his friends Ben and Radar, and I really liked them a lot. Along with Margo's friend Lacey, the group banded together for what is possibly the best road trip I've experienced vicariously through a book. The group was so unprepared that a couple of them weren't even wearing pants, and they certainly didn't have permission to leave town. But they worked together, got themselves organized, and managed to get themselves to their destination on time and with their friendship not only intact, but stronger.

Each character had his or her own version of Margo Roth Spiegelman. Since Margo didn't seem to want anyone to know the real her, everyone just kind of filled in the blanks themselves so she was a different person to each of them. Of course, we do this all the time - we don't really know most people in our lives so we make a lot of assumptions based on the bits we do know and our own worldview. It's just a bit more exaggerated with Margo because she deliberately hides a lot about herself. I found this aspect of the novel quite fascinating.

In a way, Paper Towns reminded me a bit of Looking for Alaska. Boy crushes on girl he knows little about, girl is gone, everyone tries to figure out what happened to girl. But that is where the similarities end and although I really liked Looking for Alaska, I liked Paper Towns much more. As with any John Green novel, the characters are witty and smart but still manage to be believable as teenagers. Quentin and Ben spent hours playing a video game called The Resurrection, while Radar obsessed over updating the Wikipedia-like site Omnictionary. They could be selfish and impulsive, but were decent kids who you know are going to turn out all right.

Because I listened to the audio version, I can't share the many clever and funny quotes from the book. (I do have the ability to bookmark on audible, but it's not as easy to go back through as with a paper book.) You'll just have to read it yourself. Or listen - the audio is quite enjoyable. And now I realize there's no John Green left for me to read, so he better get cracking on his next book.