The Twisted Root by Anne Perry (1999), narrated by Terrence Hardiman 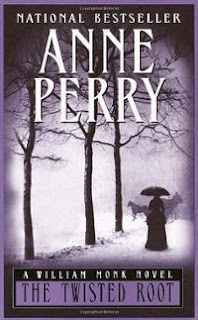 A young man approaches William Monk, frantic because his fiance has been missing after suddenly fleeing a garden party without warning. Guests saw her leave in a carriage and when the coachman is found murdered, all eyes turn to the bride-to-be. But when Miriam Gardner is found, she won't say a word about why she left the party, or who killed the coachman. It is up to William Monk, with help from his wife Hester, to get to the bottom of the mystery.

As with the other books in this series, there are apparently disparate plotlines that come together later in the book. While the main mystery is happening, Hester is investigating the theft of some medicines at the hospital where she is a volunteer. As I predicted, that story began to converge with the murder but not in the way I thought it would.

This is the first book in this series that I was tempted to give a two-star review on Goodreads. I was frustrated because Miriam Gardner clearly knew the answers Monk and the police were looking for, and simply wouldn't tell them. Usually things are a mystery because the only person who really knows what happened and is still alive is the person who has committed the crime. Here, there is an innocent witness who refuses to speak and I didn't quite buy it. There are ways to get delicate Victorian ladies to speak is all I'm saying. However, in the end during the trial when the truth came out - as it always does - it was so deliciously scandalous it was completely worth it. So, three stars it is.

Monk and Hester are now married, and that added an extra layer to the narrative as they both struggled to navigate this unfamiliar territory. Neither are used to having to answer to anyone, and it causes a bit of a strain, though clearly their affection outweighs the compromises they must make. Another point of interest was Hester's fight to gain respect for nurses, especially difficult when one of them seems to be stealing medicines, presumably for nefarious reasons. Hester concedes that many of the stereotypes of nurses are well founded, and points out that it doesn't help that part of their compensation is beer.

When I first received this audiobook from the library I was disappointed to find a male narrator, because I was hoping for Davina Porter, who narrated the first books in the series. But Hardiman was certainly up to the task and I came to find his voice comforting and enjoyable to listen to. I seemingly never tire of this series, regardless of how I experience it.
Posted by 3goodrats at 8:30 AM