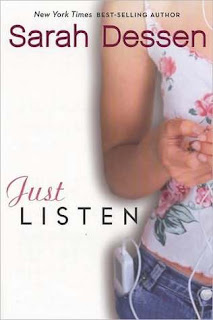 Annabel is the youngest of three sisters, all models, and until last spring was popular and had plenty of friends. But something happened at a party just before school got out, and this fall her best friends aren't speaking to her and everyone is whispering about her in the hallways. To make matters worse, her sister Whitney has moved back home as she struggles to overcome an eating disorder. As Annabel sits alone during lunch at school, wondering how her life changed so much in just a few months, a guy named Owen sits next to her. Owen hasn't heard about Annabel's new reputation and he's also the most honest person Annabel has met. As their friendship develops, Annabel comes to realize that it's time for her to also be honest and speak out.

There were so many great elements to this story. Annabel has to deal with a sullied reputation and an especially mean ex-friend who calls her a whore every time she passes them at school. Her relationship to her sisters has changed. Whitney is sullen and quiet, staying alone in her room all the time. Kirsten knew she didn't want to model anymore, but was just flailing around without a real direction. And as they each struggled to find their way, Annabel realizes she no longer wants to be a model but is too afraid to tell her mother, who was far more invested in it than any of her daughters.

On top of that is the romance. I can see why Annabel was drawn to Owen. His character is unique because he's the exact opposite of the mysterious loner dude so frequently found in young adult lit. Owen has been in jail and was forced to turn things around for himself by managing his anger. His radio show is even called Anger Management. Part of his efforts include being open and honest and communicative. This is part of what Annabel finds so appealing about him, because she keeps so much bottled up inside and is afraid to open up.

I had forgotten how much I enjoy Sarah Dessen, and now I want to go read/listen to all of her books. They touch on serious issues, yet still feel light-hearted. Her characters feel real and I want to be friends with them; even her parents were endearing. By the end of this book, I was a little jealous of Annabel's family and Owen, who is just awesome. (They didn't make high school boys like that back in my day.)