The Mussel Feast by Birgit Vanderbeke (1990) 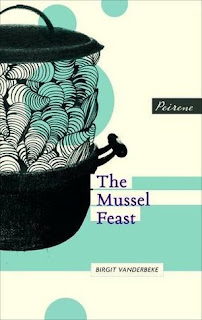 A mother and two teenage children prepare for the man of the house to return from a business trip. They prepare a feast of mussels, scrubbing them in the bathtub and putting them in a huge pot to boil. The evening gets later and later and still he does not arrive home. Narrated by the teenage daughter, this brief novella recounts complicated family dynamics as they sit around the table drinking wine and talking on what has turned out to be a very unusual evening.

I made it almost to the end of this delightful monologue before realizing that none of the characters have names, so artfully is it crafted. There is no actual dialogue either, the conversations being woven into the lengthy - but not cumbersome - sentences:

"I don't think we ever ate with a knife and fork when my father was away. We let our hair down while you were away, Mum said when my father asked, what did you get up to without me; it's really nice to let your hair down a bit sometimes, Mum continued slightly wistfully, because she had as much fun as we did and less work, too, when we were alone with her."

At first, we learn how important it is to the father that he have a "proper family" and the way his family attempts to conform. The mother slips into "wifey mode" when her husband comes home from work, being agreeable and accommodating. Gradually we learn just how strict and controlling he is with his family and just how much of a relief it is when he is not there. As the family sits over their ruined meal, drinking wine and talking, they become bold in their criticism and start to feel how much better off they would be without him. Indeed, after a brief period of worry, they seem not to care whether he ever arrives home or not.

After ordering this book (and paying international shipping, because it's not available in the US) I worried that it might be dry and literary. But I was pleasantly surprised that it is just exactly the sort of book I like. I could see myself reading it again because at just 105 pages it's a very small investment of time for a great deal of enjoyment.
Posted by 3goodrats at 8:30 AM