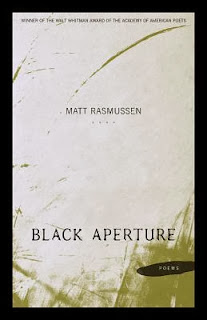 Rasmussen's debut poetry collection centers on his brother's suicide and its aftermath. Meditations on the act itself, the pain of his brother's voice still on the answering machine, and the way the author now views the world through the lens of the tragedy make up this slim but powerful volume which was a finalist for the National Book Award this year.

I'm not really qualified to remark on poetry, since I've spent little time reading it in the last 15 years or so. Back when I did read poetry, I concentrated pretty heavily on Sylvia Plath with a little Anne Sexton and a couple others thrown in. But I wanted to try again. A year or so ago I tried reading Tracy K. Smith's Life on Mars, which won the Pulitzer for Poetry in 2012, and though I could appreciate it on some level, it was mostly impenetrable and I abandoned it. I felt like she started with some ideas and thoughts she wanted to convey, then slathered them with a whole lot of words, requiring the reader to peel each poem like an onion to get at its core. Is that what poetry is supposed to be? Why not just say what you want to say in a way that is poetic, without completely obscuring it?

That, fortunately, is what Matt Rasmussen does as far as I can tell. I'm sure there's a lot I'm missing that could be grasped by someone more proficient than I am at reading poetry, but the point is that I don't feel like I'm missing anything. Reading these poems, I felt like I could understand enough to make it worthwhile and even pleasurable, though I hesitate to use such a word about poems on such a traumatic subject.

All were written as a series of non-rhyming couplets - I don't know if this is significant, or if it is usual to write a collection all in one style. But because of this style, with its frequent spacing, the poems felt less dense while still heavy with meaning. Rasmussen's language was clear, vivid, and darkly beautiful.

Here are some passages I especially liked.

"At the base
of each bare tree

someone has spilled
a bucket of shadow."

"But together we decide
which way the dream goes

like spilled water on a table
we carry across the room."

"rocked back and forth
through the air
as if someone was

scraping the rust
off the sunset."

But of course you need to read the poems in their entirety to really appreciate them, especially the short ones like "Monet as a Verb," which is also a really fantastic title. Other poems had really great titles too, like "In Whoever's Hotel Room this Is" and "We're Not the Stars, We're What's Between Them."

Two poems were about his brothers hands, which I found quite intriguing though I'm unsure of the significance. They were both in the second section of the book, "Elegy in X Parts." The narrator talks about the hands being delivered with the mail, and putting them away somewhere only to have them appears in various places unexpectedly. It was a little creepy, in the best possible way.

This was a lucky pick I think, because it just happens to be the kind of poetry I like. Dark, vivid, and just accessible enough for someone like me to read. They definitely benefit from rereading and the more I do, the more I like them. Good poems beg to read over and over again, to wring any last bits of insight from them and consequently, I'm reluctant to return this book to the library.
Posted by 3goodrats at 9:34 AM

I don't read much poetry, but when I do I look for emotional connection and it sounds like you definitely had that with this collection.

Yes, it was a very fortunate accident!