I promised an update on my Geodesic Cardigan ages ago, and then set it aside and haven't touched it since. But I realized you haven't seen it since it was far too many balls of tangled yarn. It looks much nicer now. 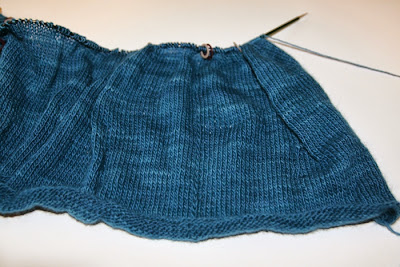 I got to a point where I had to knit until it was a certain length, so the last time I touched it I took it off the needles to measure it. I have no idea what I determined, so the next time I pick it up I have to take it back off the needles and measure it again before I can move on. Thus, I have ignored it completely.

So far my biggest concern is the way the bottom turns up. Did I cast on too tight? Will it block out? Will it matter anyhow, if I run out of yarn before I'm done, as I fear I might? So many questions.

I've recently been distracted by other projects, such as another pair of socks, and an odd little cross stitch I started working on after coming across the kit stashed in my sewing table. I'll show you one of those next time I do a Sunday post.
Posted by 3goodrats at 12:41 PM