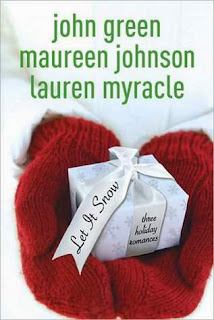 Amidst a Christmas snowstorm, one small town hosts three interconnected romances, each written by a different author. First, a girl named Jubilee sets out on a train to her grandmother's house on Christmas Eve, but the train is stopped by the snow. Jubilee hops out and wanders to the nearby Waffle House, meeting up with a boy named Stuart who is trying to get over his breakup. When a group of cheerleaders from the same train end up taking over the Waffle House, Jubilee and Stuart make their exit. In the second story, a boy named Tobin is hanging out with a couple of friends when he gets a call from a friend who works at the Waffle House, begging them to come over because of the cheerleaders. And bring Twister! Tobin, JP and a female friend known as the Duke start making their way over, but the snowstorm proves to be a larger obstacle than they thought. In the third and final story, Addie arrives at an early shift at Starbucks and an eventful day follows which ties up all three stories.

Maureen Johnson's "The Jubilee Express" began the collection quite promisingly. Jubilee was named after Floby Santa Village building #4, Jubilee Hall, which should tell you something about her parents. So it will come as no surprise that on Christmas Eve they were arrested in a riot related to purchasing the newest piece for their Floby Santa Village. Thus, Jubilee is put on a train to go to her grandmother's house for Christmas. She had been looking forward to spending the evening with her boyfriend Noah, and once those plans were dashed every new obstacle put her in a worse mood. But it also gave her time to reflect a bit and, of course, develop a new friendship with Stuart. Jubilee was an appealing character, and her story was funny and charming.

In the second story, "A Cheertastic Christmas Miracle" by John Green, a group of friends goes on an across-town adventure on the promise of spending time with a group of cheerleaders at the Waffle House. One of the three friends, however, is a girl called the Duke who is less excited to meet up with the very sorts of girls she dislikes the most, but goes along with it in the interest of her friends, Tobin and JP. One of those friends appreciates her in a whole new way as the night progresses. Though not John Green's finest work, his style is still recognizable here in the wit and believability of his teenagers, and this was a solid second part of the collection.

The third story, "The Patron Saint of Pigs," fell a bit flat for me. Hearkening back to the first story for just a moment, Jubilee crosses paths with a guy on her train named Jeb who is trying to get to his girlfriend. He has been desperately trying to get through to her but can't get a signal on his phone. They are apparently going through a tough time in their relationship. Lauren Myracle's story is told from the point of view of Jeb's girlfriend Addie, who cheated on Jeb at a party not long before and is filled with regret and desperately wants him back. I am convinced he is too good for her. She's a fairly thin character who is self-absorbed (we know this because we are told over and over) and is trying to get through a hectic work day, but needs to sneak away on a break to pick up a teacup pig named Gabriel for her friend. I didn't really care about Addie, her friends, or the pig. (And I like pigs.) It somehow all felt a bit preachy, and when the hippie artsy lady showed up and they started talking about angels watching over us, I pretty much forgot any appeal the story held. It wasn't horrible, it really wasn't, there just wasn't a lot to it.

This is sort of a tough assignment. Three authors writing three stories, all of which shared a setting and contained characters from the other stories. Plus they are all romances, and it's Christmas-themed. I got a little tired of it all by the third story anyhow, but I still think it was the weakest. Even so, it was an amusing story and I felt a certain sense of satisfaction when all three stories tied up neatly at the end. The whole collection was pretty fluffy, but charming and fun and not a bad bet if you're looking for a holiday themed young adult selection.
Posted by 3goodrats at 9:00 AM