This Is the Story of a Happy Marriage 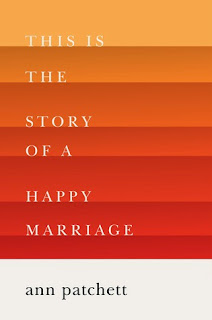 This book of essays is not, as you would expect, primarily about marriage. It's about everything from Patchett's Catholic school experiences to a road trip in a Winnebago to trying to pass the LAPD policy academy entry exam. Most essays are pretty short, and all reveal something Patchett's life and how she views the world.

It's tough to summarize any sort of collection, so I'll just share some of my favorite parts. In "Love Sustained" she recounts the period when she took care of her ailing grandmother. She candidly admits this is not something she had planned for, saying "I had planned to live far away from my family and miss them terribly. I had every intention of feeling simply awful that I wasn't with my grandmother in her years of decline..." The essay "This Dog's Life" is the story of how she came to have her dog, Rose, and the insistence of people around her that clearly, what she really wanted was a baby. She muses "I imagine there are people out there who got a dog when what they wanted was a baby, but I wonder if there aren't other people who had a baby when all they really needed was a dog."

Other essays I enjoyed include the one alluded to earlier in which Patchett trained for the police academy exam as part of a book she ended up not writing. The title "The Wall" refers to one of the most difficult parts of the physical exam in which participants must scale a 6-ft wall. Mostly I enjoyed her perspective on the preparation for a career that was so completely different from her own. "My Life in Sales" is a behind-the-scenes look book touring, including the observation that people who attend book readings always want to ask about the previous book. I've often wondered how authors feel about that, and now I know. Three different pieces discuss the book Truth & Beauty from slightly different perspectives. It was chosen as a required read for an entering freshmen class at Clemson University, which set off a firestorm of controversy. It would never have occurred to me that Truth & Beauty would be considered objectionable, but I suppose every book if offensive to someone out there, and if not, it's probably not worth reading.

I devoured this collection with a vigor I didn't anticipate, even though I knew how much I enjoyed reading Ann Patchett. Though I've read both Bel Canto and State of Wonder, it is her nonfiction I love the most, counting Truth & Beauty as one of the few memoirs I truly love. The essays in this collection were already published elsewhere and though I had read "The Getaway Car" already, I didn't skip it here. It's just as good the second time. Before starting - and what spurred me to read this immediately and not wait a moment longer - I listened to an interview with Ann Patchett on NPR's show "On Point". Even if you don't plan to read this book, I recommend taking 45 minutes to listen to the show. She is just as eloquent and enjoyable with that medium as she is with the written word.
Posted by 3goodrats at 9:15 AM

Labels: ann patchett, books, nonfiction, reviews, this is the story of a happy marriage