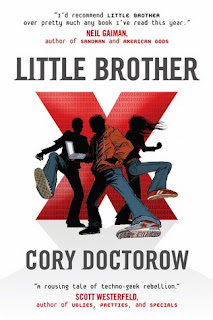 It is the not-too-distant future, and San Francisco is hit by a terrorist attack. In the confusion, Marcus and his friends are rounded up and sent to a bizarre prison camp where they are tortured before most of them are let go. Newly angered by his experience with the Department of Homeland Security and the new police state in which he is now living, Marcus goes online and undercover as "M1k3y," the leader of a new revolution.

The storyline was pretty good, and I liked the theme of safety versus privacy. Most of us can remember what it was like after 9/11 when the government rushed to pass the PATRIOT Act which effectively chipped away at our civil liberties - most notably our right to privacy - in the name of security. The fear instilled in us by the attack was used liberally to convince us this was for our own good. In Little Brother, this second attack paves the way for the passage of the PATRIOT Act II, which puts people under almost constant surveillance. Many of the conversations we had after 9/11 are echoed here between Marcus and his parents, classmates, and teachers. The best aspect of the book was the issues raised: the balance between security and privacy, whether or not the surveillance is effective, and if this constant surveillance means the terrorists have won.

I didn't find the actual story that fantastic. Many of the characters were fairly two-dimensional and the arguments oversimplified. Everyone either thought the governments actions were justified or not, but nobody struggled internally with this dilemma. The actual attack and the large number of deaths were pretty glossed over too, as though everyone recovered from the loss immediately and went on to concern themselves only with the new normal of surveillance. I realize that Marcus was locked away for several days after the attack, but the news coverage would have still been happening and he would have been bombarded with images of destruction and the victims. He never felt stunned at the sight of the wreckage, the memorial flowers that would have undoubtedly appeared there, nor did he ever once think about who had done it, whether they'd be caught, whether they would strike again. The event instilled no fear whatsoever in him. This simply did not ring true to me, as I thought about the aftermaths of both 9/11 and last year's Boston Marathon bombing.

Because of the highly technical nature of what Marcus is doing, there are a number of info dumps to slog through. If you're interested in that kind of thing - hacking Xboxes, encryption, etc - it's probably interesting. For me, I had a very tenuous and fleeting understanding of these concepts, but it turns out it's not that important to grasp the technical specifics in order to understand the story.

For the right teen, this would be a good introduction to some of these issues, especially as people that young don't remember the time before 9/11 and have grown up used to the idea of the government and corporations (like Facebook and Google) knowing everything about them. I'm glad Doctorow wrote this since there are so few other YA books about these issues. It's pretty dense for YA though, so it wouldn't top my list of enjoyable books for teens.
Posted by 3goodrats at 11:20 AM