The Valley of Horses 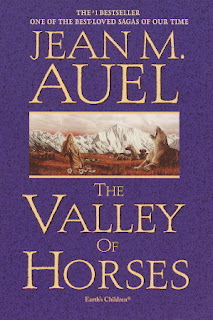 Ayla is on her own now, leaving behind the only people she's ever known. She sets out to find more people like herself, but in the first few months still hasn't encountered another person. Soon she realizes she must settle down and prepare for the long winter ahead, and she finds a valley with everything she needs. Before she knows it, she has a young foal as a pet, and a cave lion, and the valley becomes her lonely home for a few years.

Meanwhile, a man named Jondalar is traveling with his brother Thonolan. They have been journeying for a couple of years, meeting new people and learning their languages and their ways. Jondalar is becoming restless for home, but Thonolan wants to keep going. Tragedy strikes, bringing Jondalar into Ayla's path, the first person like herself she has ever seen.

I knew before beginning this book that it was supposed to be a romance between Ayla and Jondalar, but Auel took her sweet time bringing them together. I think it was about 300 pages into the book when they finally met. This is probably so we had time to get to know Jondalar first, and I agree this background is important, as is Ayla's adjustment to living and surviving on her own. Still, as much as I liked hearing about her taming of wild animals and Jondalar's adventures, I became quite impatient for the story to move forward. Much like the glacier frequently referenced by the characters, it moved very slowly.

Once the romance part of the story began, I became a little frustrated by some of the things that typically annoy me in romances. Ayla and Jondalar constantly misunderstood each other - even after Ayla learned his language - each continuing to think that the other was not interested. Obviously they came from different cultures, which caused some of their problems, but also Jondalar had a hard time accepting that the Clan who raised Ayla were human. People who were not Neanderthals referred to them as "flatheads" and considered them animals. So, ok, that is a hurdle, and the fact that Ayla had a child with one of them (though even Jondalar refuses to acknowledge the cause-and-effect relationship between sex and pregnancy.) But I felt the romantic tension went beyond what was necessary, or even entertaining.

Despite my complaints I still liked the book. I like the unfamiliar time period in which the story takes place, and I like the characters and their story. I just felt like the book could probably have been half the length it was, and would have consequently been better for it.
Posted by 3goodrats at 1:47 PM