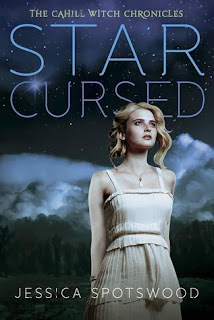 Young witch Cate Cahill is now a member of the Sisterhood, learning more about magic in an environment where her powers don't need to be kept secret, yet still heartbroken over the choice to break her engagement with Finn. The Brotherhood have increased their persecution of witches and the Sisterhood are becoming desperate to put a stop to it, but they are divided into two camps. A struggle for leadership of the Sisterhood is brewing as well, because the current leader is ill and Cate has still not come into the powers predicted by the Prophecy.

Even though this book came out in June, I was determined to wait for the audio version to appear because I so enjoyed the audio of Born Wicked. I waited SO LONG. Finally, in desperation, I messaged the lovely and friendly Jessica Spotswood on Goodreads only to learn that there will be no audio. So ultimately I read the print version, while imagining Nicole Sudhaus reading it to me.

Audio or no, I am continuing to enjoy this series a great deal. I already wrote in my review of Born Wicked how much I like the alternate history Spotswood has created, but I didn't mention the strength and bravery of the women and girls in the books. Their situation in this society is complicated, and there aren't any simple solutions. Frequently in YA there is a clear right and wrong and, therefore, good and bad characters. Not so here - it is realistically nuanced as it would be in real life. It is easy see why Sister Inez and her followers feel like action needs to be taken soon, and why they are willing to make sacrifices. Although Cate disagrees, she frequently doubts herself because just as in real life, there is no clear right and wrong. But she makes her decision and sticks to it. Although there are men who are on their side, ultimately it is the women who must take responsibility and take action, and they do it with courage.

Somehow I omitted discussing Cate's romance with Finn in my review of the first book, though I enjoyed it a great deal. It came to what seemed a heartbreaking end but I was happy that Star Cursed brought new hope to that relationship. In this alternate world of 1800s New England same-sex relationships were sometimes a surprise, but not shocking or especially disapproved of. I very much like Spotswoods treatment of the romance between girls and women in her books. It is similar to present-day Massachusetts, where it is generally accepted but not the norm.

There is just so much I liked about this book, basically everything except the title (and I don't have a better idea, so there you go.) It was a very strong second in the series, which will be continued with the more appealingly-titled Sisters' Fate in August. August! After the shocking ending - which was even more upsetting than that of Born Wicked - I do not know how I'll wait until then. I also don't know how the author will resolve the horrible situation she created at the end, but I have faith that she will bring it to a satisfying conclusion. She hasn't disappointed me yet.
Posted by 3goodrats at 6:17 PM