The Things a Brother Knows

The Things a Brother Knows by Dana Reinhardt (2010) 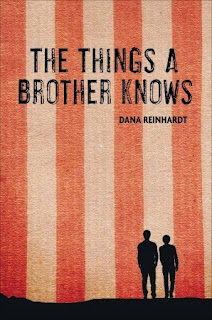 When Levi's older brother Bo returns after serving in the Marines, he is not the same person he was before. Bo spends all day in his room, only coming out briefly for meals, and doesn't talk about his experiences in the war. Levi knows that Bo is planning something and is determined to find out what, even if that means following him when it is clear he wants to be left alone.

I'm always happy to see more young adult books focused on guys, and this one has the added bonus of tackling a topic you don't see a lot in fiction at all, but especially YA fiction. Clearly, Levi's brother is suffering from PTSD and his family doesn't know how to help. Do they give Bo space? Do they try to talk with him though he clearly doesn't want to? Do they just leave him to figure things out for himself? Levi already felt abandoned and betrayed when his brother joined up, and now he feels like the brother he once admired might be gone forever.

Other characters in the cast include Levi's best friends, Pearl and Zim, who not only support their good friend, but provide a little comic relief. Levi and Bo's family wasn't quite as fleshed out, but there was enough detail to keep them interesting. They are Jewish, and their father also served in the military, so there's a little extra detail and complexity. By the way, nothing about this novel is pro- or anti-war, it's more about how the experiences of war affect an entire family. As an added bonus, there is a road trip.

I heard of this book a while ago and only finally picked it up because it was a contender for my library's upcoming Community Read (it didn't win - we're doing The Book Thief.) It was a very quick read and I really liked it while I was reading it, but I don't think it will stick with me. I'm already forgetting a lot of details. Still, I think it was a pretty well-crafted book and I will likely recommend it to teens in the library looking for realistic fiction.
Posted by 3goodrats at 9:30 AM