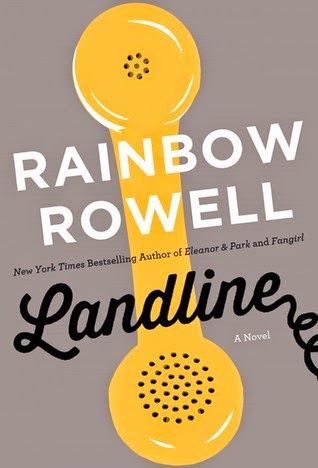 In Rainbow Rowell's highly-anticipated new novel for adults, a woman mysteriously makes contact with a younger version of her husband through the old yellow telephone at her mother's house. Georgie McCool is supposed to be leaving for Omaha with her husband and kids to stay with his family for Christmas. But something has come up at work and she decides not to go at the last minute. She is a tv writer, so her schedule isn't a shock to Neal, but this seems like the last straw and he packs up the kids and goes without her. Later at her mother's house, her cell phone dead, Georgie uses the old phone in her room to try to call her husband, but instead reaches the 22-year-old version of him. It was another significant time in their relationship and Georgie wonders if she has been handed this strange opportunity for a reason: is she meant to fix their marriage? Or prevent it from ever happening?

The premise is strange and remains unexplained, but if you can just suspend your disbelief it actually works quite well. This isn't a story of action - it's mostly about Georgie and Neal's relationship from its earliest days. Not until late in the book is there any real action. It felt sort of like time stopped so that Georgie could figure everything out. It didn't actually stop, of course. Her coworker and best friend Seth tried to get her to come to work as she languished around her mother's house depressively in Neal's old Metallica t-shirt. She just resisted everything that was happening around her, continuing to wear her dirty clothing - or her mother's clothing - in her refusal to go back to her empty house.

Some major elements of the story were predictable, one thing in particular that I figured out really early on, and I am not the most astute of readers. I just waited for Georgie to also figure it out, which she did eventually. This didn't bother me. Landline isn't a suspense novel, after all; it's a novel about relationships, and they are often predictable.

As always, the best part of a Rainbow Rowell book is her language. George refers to Neal's lips as "a testament to cell division." When her younger sister Heather asks about whether she had fallen in love before Neal, she says "Maybe I came really close to falling in love, cumulatively, over two or three relationships." I also love the nostalgia she invokes with her references to Crayola Caddies and Mork.

I pre-ordered the audiobook when I learned that Rebecca Lowman would be narrating. Rainbow Rowell and Rebecca Lowman are becoming inextricably linked in my head, which is sort of a problem and the reason I haven't yet listened to Attachments. I guess I could read the print version, but that's not how I experience Rainbow Rowell. You can see my dilemma.

It's tough to compare to Rowell's other books that I've read because it's for adults and, therefore, inherently a bit different. I still love Eleanor & Park more, and maybe even Fangirl, but still....it's Rainbow Rowell and she has a magical way with words that just captivates me every time. I feel like she could write about the most boring non-fiction topic out there (the history of adhesives? how to clean upholstery? ocean bottom sediment?) and it would be a pleasure to read because she would say such unique things about it in a way that we could all relate to. Yes! I'd say. That is exactly what ocean bottom sediment is like, when you really think about it. Rainbow Rowell is magic, like a landline that connects you to fifteen years ago.
Posted by 3goodrats at 2:35 PM