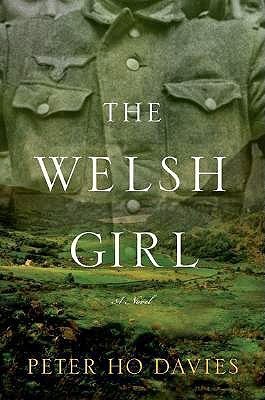 I am forever saying that I'm done with WWII fiction, only to go on and read something else that is very firmly set in that period. In this case I'm finally getting around to something that I've wanted to read since I came across it by chance on a library shelf soon after it came out in 2007.

A young German surrenders and is brought to a POW camp in the Welsh countryside. Nearby, a young woman named Esther lives with her father and a young evacuee named Jim. The novel alternates between their two stories, which eventually cross when they meet.

Some decisive events take place early on - Karsten is captured, Esther is raped - but then it all moves rather slowly for quite a while until late in the novel when the two finally meet. In these later pages the pace quickens as the action picks up. Not to say that it's boring until then: the story may be slow, but it's filled with lush descriptions and profound insights into both major characters.

Esther must deal with the aftermath of her rape, which she hesitates to even name as such. The man was a soldier who she thought cared for her, and she decides it was more of a misunderstanding. "He meant one thing, she meant another." Considering the idea of being forced, she wonders how this was different from any other experience in her confining life. Still, there are consequences, and Esther is not able to leave it behind her. I was often surprised by Esther, which made her all the more intriguing. She is much more than a simple country girl.

Karsten, meanwhile, is unable to escape the fact of his surrender. The other prisoners won't let him forget it, and he does not know what to write to his mother, how to explain his present circumstances. Some of the most vivid and atmospheric descriptions were part of Karsten's story, such as this detail early on: "The sand, when he touches it, still holds the silken warmth of the long summer day, but when he pushes his fingers below the surface, the grains are chill and coarse." I grew up near a beach and know that feeling very well, but had forgotten it until reading this passage.

There's a third important character as well, an interrogator named Rotheram who is investigating Rudolf Hess, a politician close to Adolf Hitler who is being held prisoner in Wales. I wasn't as drawn into his story as the rest, likely because I got so little of it - just a few chapters in the whole novel - and because it was more political than personal. But it served as a pretty strong reminder about what was going on at the time, far away from this rural countryside, and strengthened the connection between the other parts of the story.

I expected to be let down by this novel, not just because I've waited so long, but because it was compared to The English Patient, which I found tedious and only slogged about halfway through before giving up. But I'm very glad I finally gave this one a chance. It's a bit more literary than what I've been reading, and I think it would be great for a book group. There's a lot going on (I know I probably missed some things) and certain parts of the story were left open, inviting speculation. Luckily, a coworker happened to be reading it at the same time, so we did get to discuss it a bit together. All in all, The Welsh Girl was surprisingly satisfying.
Posted by 3goodrats at 8:22 PM