No Choirboy: Murder, Violence, and Teenagers on Death Row by Susan Kuklin (2008) 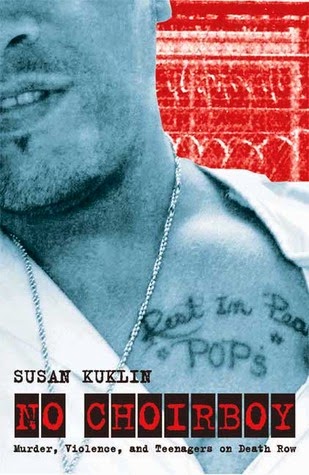 In 2005 the Supreme Court ruled it unconstitutional to execute people who were under 18 when their crimes were committed. Susan Kuklin went into prisons and spoke to inmates who were sent to death row as teenagers. In one case, she spoke to the family of a man executed for a crime committed when he was 17. Giving voice to a population usually hidden from the rest of us, Kuklin shares, in their own words, their lives behind bars, their regrets, and their aspirations.

I gave this book 4 stars on Goodreads, but I kind of feel like my opinion is clouded just because of how strong I feel about these issues. Don't get me wrong - I think it's a good book! But it's the content, the stories of these young men, that I found so powerful and heartbreaking. Kuklin clearly writes from an anti-death penalty standpoint and presents evidence making clear just how tenuous some of the convictions were. I don't think it's a surprise to many of us that the justice system is flawed, yet I continue to be shocked and horrified every time I hear another story about an unfairly tried case.

Around the time I began reading this, I also listened to an episode of On Point about juvenile prisons, and heard stories of teenagers given sentences that seemed to greatly outweigh their crimes. This record then followed them around for years, thwarting opportunities because of mistakes they made as kids. Furthermore, one of the guests also emphasized how doing time in a juvenile prison increases the likelihood of returning to the system later.

In the case of Kuklin's book the crimes are all more serious, although it's not always clear that the convicted were actually guilty. In some cases, the trials were blatantly unfair. One inmate received a death sentence because another guy at the scene testified against him to ensure he didn't get the death penalty. In another situation, an African-American was tried by a jury in which two of the jurors were known to be racist. Another potential juror, involved with the NAACP, was not picked. A jury of one's peers, indeed!

Even when someone is guilty of murder...I just have a hard time with this. I have always, always opposed the death penalty for a whole lot of reasons. The family of a victim was interviewed for this book and told about how they opposed the death penalty in the murder case of their family member because if this guy was killed it still wouldn't bring the victim back. The victim's father explained how devastated he was by his son's death and said he didn't want to put another parent through that, regardless of what their kid had done.

Kuklin really gets to the crux of the matter when she asks if we should all be reduced to the single worst thing we've ever done. We all screw up and when we hurt someone there should certainly be consequences. But I don't believe that every murderer is beyond redemption, especially when they committed their crime so young. Should one horrible mistake destroy a person's life forever? What good does that do anyhow?

You can make the same argument for life imprisonment. It's just so completely unproductive. Who does it help? It won't bring back the victim or undo the crime, and it sure as hell won't put the offender back on the straight and narrow path. It obviously doesn't work as a deterrent either, judging from how full our prisons are. (According to the U.S. Department of Justice, 1 out of every 108 residents of the United States is incarcerated.)

As you can tell, I have a lot of opinions about this. I'm very glad this was chosen for my Not-So-Young Adult book group at the library because I think we'll have a really great discussion. I just flew through this book and I kind of want more. I've become rather fascinated with prison conditions, mandatory sentencing, and the loopholes that result in wrongful convictions. Do you have any suggestions for further reading on this? I'd love suggestions for books, articles, documentaries, or anything else you could recommend.
Posted by 3goodrats at 10:28 PM