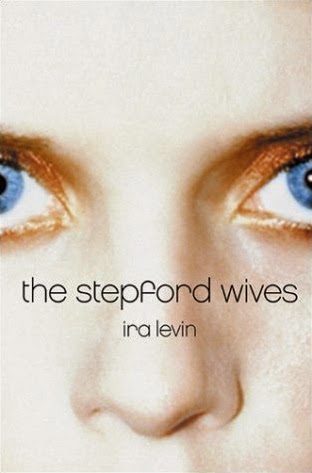 The Stepford Wives has become so ingrained in our cultural psyche, it really needs no introduction. Everybody knows that a Stepford wife is a perfect, bland example of a homemaker: keeping an immaculate house, smiling pleasantly, and having no real thoughts or opinions of her own. There's more to the story of course - it follows a particular couple, Joanna and Walter, who move to Stepford with their kids. Joanna notices something strange about the women and their lack of interest in socializing, much less in women's liberation issues. She becomes suspicious of the Men's Organization, and confides in her one "normal" friend, Bobbie. As the story progresses, Joanna begins to wonder if she's on to something, or if she's just crazy.

This subtlety is what makes the story so sinister. It's horror of a sort - you can't really read it without a sinking feeling of dread - but there are no monsters, no blood, no crazed killer chasing after the heroine. It's just a neighborhood that looks perfectly normal from the outside, but where something is very much not right.

It is significant that The Stepford Wives was published in 1972. The height of the women's liberation movement, and the inevitable backlash, are the perfect backdrop and in fact I don't think the novel would exist without them. Joanna's desire to start a NOW chapter in Stepford is almost quaint, but I couldn't help but admire her outspokenness. (And I miss this sort of pure, unadulterated feminism. It's just not like it used to be.)

Not having read The Stepford Wives since the 1980s, I had forgotten just how creepy it is. It's also very short, more of a novella than a novel, and I relished every bit of it this time through. Though it may seem a little dated, the quest for female perfection is still alive and well. It's not really about being a housewife anymore, of course, it's about being a career woman and housewife and mother and having additional fulfilling hobbies and interests. Instead of focusing entirely on keeping a perfect house, we talk about achieving "balance" which seems to be code for managing to do ALL THE THINGS. Elizabeth Gilbert posted a beautiful essay about balance here, and I strongly suggest you read it, especially if you feel like you are failing at achieving this balance everyone keeps talking about. Then go read The Stepford Wives. It will make you feel better about slacking on housework, I promise.
Posted by 3goodrats at 10:35 AM