The Tragedy Paper by Elizabeth LaBan (2013) 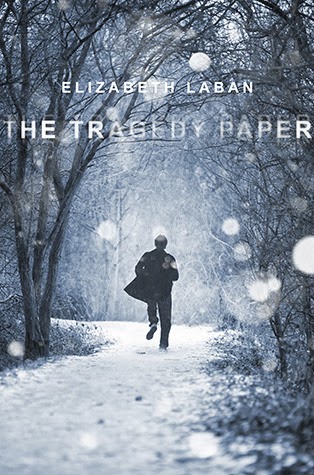 It is Duncan's senior year at the prestigious Irving School, and there are two things looming over him as he arrives: what treasure will be left for him in his new room, and the upcoming senior project known as the Tragedy Paper. It turns out that the former occupant of his room was an albino named Tim MacBeth and the treasure he left behind was a series of CDs with the story of everything that happened the previous year, a series of events that culminated in something Duncan did not want to revisit, but which Tim promised would help Duncan with his Tragedy Paper. The novel moves back and forth between Tim and Duncan's related stories of both their senior years at Irving.

Unlike Duncan, Tim didn't arrive at Irving until mid-way through senior year when his parents moved out of their house and went to Italy. On his way to Irving, Tim gets stranded at an airport and has an eventful night with a girl named Vanessa who, it turns out, is also a student at Irving. She also has a very possessive boyfriend, who is nevertheless totally unthreatened by Tim because surely Vanessa is not interested in some weird albino kid.

For a while I thought that Tim made too much of a deal out of being albino, considering himself an outcast. To me, he's just pale, which isn't all that weird. But he does have some specific needs, like wearing sunglasses to protect his incredibly-sensitive eyes. His low self-confidence kept him on the sidelines until Vanessa's boyfriend Patrick reeled him into his social circle, somewhat against Tim's will. The rest, as they say, is history.

I was drawn into this story immediately by the voices of both Duncan and Tim, and the promise of tragedy it all seemed to be leading up to. Say what you will about the preponderance of boarding schools in YA literature - it sometimes feels impossible to escape - but this has got to be one of the very best. There is something reminiscent of Dead Poets Society here, especially in the English teacher Mr. Simon, assigner of the Tragedy Paper, who ends every class by saying "Go forth and spread beauty and light." All the characters were well-drawn, even the minor ones, and something about the way LaBan tells the story made it all feel very immediate. Much like Duncan's experience listening to Tim's CDs, it was an immersive experience.

I love books in which the teenage characters are really getting into an assignment and it sort of takes over their lives and they learn more than they ever expected to from it. There's a lot more going on here though, as we learn about Duncan's and Tim's romantic interests and how hearing Tim's story makes Duncan seize the day with his crush, Daisy. There's also the culmination of each story in the senior game, a dead-of-night activity organized secretly by someone in the senior class, who then passes the responsibility down to a junior for next year.

As much as I've never cared about private schools, I suddenly wanted nothing more than to go to the Irving School. This place is more posh than my expensive private college. Everyone has a single, the cafeteria serves locally produced foods, and traditions include a senior donut breakfast, where a local donut baker comes and help students make and decorate their own donuts and everyone sits around lazily all morning ingesting carbohydrates.

Speaking of baked goods, English teacher Mr. Simon is also fond of baking, sharing his wares with Duncan. You see, Duncan got the smallest room in the dorm (though let me reiterate: they are all singles) and Mr. Simon always shares his baked goods with the occupant of that room. Get stuck with small room, get free baked goods.

There was some hype surrounding The Tragedy Paper when it came out last year, but it sort of fell by the wayside of my TBR list until the Not-So-Young Adult book group at work voted to read it. I hope they all like it as much as I did!
Posted by 3goodrats at 11:53 AM