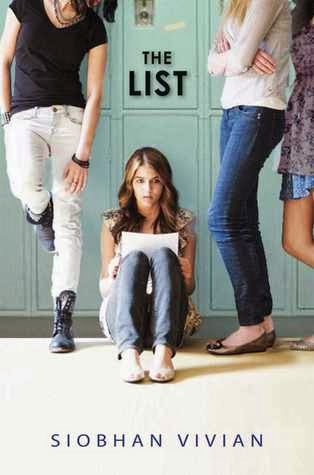 Every year just before homecoming, a list is posted at Mount Washington High. Nobody knows who writes it or how the task is passed down year after year, but everybody understands its significance. The list contains the names of eight girls: the ugliest and prettiest of each class, freshman through senior. This is the story of the girls on one year's list in the week between the list's release and homecoming.

The story follows all eight of the girls on the list, and I was a little wary because I sometimes have difficulty when books jump between more than two characters, but it worked surprisingly well. This public judgement, as you can imagine, has strong social ramifications for every girl on the list, not just the so-called ugly ones. It's not a long book so each girl doesn't get very many chapters, but some of them interact with each other and Vivian did a great job of constructing this way and making the story feel complete.

Danielle, the so-called ugliest freshman, is strong and athletic and her boyfriend struggles with how she is taunted and called "Dan the Man." The ugliest sophomore, Candace, is actually considered pretty, but only on the outside. Sarah, the ugliest junior, decides not to bathe all week. Ugliest senior Jennifer has been on the ugly list four years running, and decides to treat it as a great success. (I really want to keep putting "ugly" in quotes because I don't believe any of these girls are ugly, but it gets too messy that way.)

Abby, prettiest freshman, naively considers being on the list an honor and an accomplishment despite the resentment from her older sister. Lauren has been home-schooled all her life and being named prettiest sophomore soon after starting school is something she just doesn't know how to handle. Prettiest junior Bridget is applauded for her transformation over the summer, but only she knows the changes are from her new eating disorder. And senior pretty girl Margo, who many suspect wrote the list, tries to face how and why her friendship with four-year-running ugly girl Jennifer ended.

So much high school drama! We all know how damaging our society's beauty standards can be, especially to young women, and these girls must confront judgment of their appearance in ways most people don't have to. Can you even imagine? As if high school isn't awkward enough. I loved all the different ways in which the girls on the list responded, and was very curious about what would happen at homecoming.

I went to a tiny high school in the middle of Maine and we did not have homecoming, so everything I know about it I have learned from books and tv. I know there is a big game and a dance where someone is crowned queen (and also king? I don't even know) and there's lots of excitement surrounding it, kind of like prom, I guess? There is lots of tension in this story surrounding the dance because usually the girl named prettiest senior wins homecoming queen, but a huge campaign begins on behalf of Jennifer, the "ugliest" senior girl. And what exactly is Sarah planning with her hygiene boycott? Plus, lots of shopping for the perfect dress, perhaps the most stressful part of planning for any big dance.

This was a breath of fresh air after the last book I read and exactly what I needed at the time. It seems frivolous in some ways, but it was actually an insightful look at the importance we place on appearance, all the ways in which we can be outcasts, and the strength of friendship. The List is a fun page-turner of a book that leaves the reader with a lot to think about. I'd recommend it to anyone who likes reading about the experience of girls facing social pressure in high school.
Posted by 3goodrats at 12:34 PM