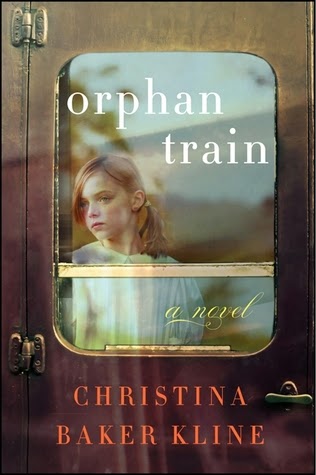 In the late 19th and early 20th century, trains full of orphans traveled west from the East Coast looking for adoptive families. This novel tells the story of one such orphan, a young Irish immigrant whose family perished in a fire. Niamh is all alone, sent away from New York to the Midwest where she lives with a series of families before becoming an adult and, ultimately, moving to Maine. In present-day Spruce Harbor, a 17-year-old foster kid named Molly takes a community service job to keep herself out of juvie. She is enlisted to help an elderly woman clean out her attic, but what she gets instead is a fascinating story of a youth that is even more troubled than her own.

Niamh's story was a sad one from the beginning. She was only around 7 when her family came to New York from Ireland, and learned that their kind weren't always welcome. There were echoes of every story I've read about the immigrant experience in the early 20th century, from prejudice and unemployment to hunger and crowded tenement buildings. Losing her family seemed like the worst thing that could happen, until she had to experience living with strange families for reasons that were less than charitable.

But despite the hardships, many details drew me into that time period in the very best way. When we meet one of Niamh's teachers, Miss Larsen, just the details of her wool skirts and the little schoolhouse and the boarding house where she lived with nice Mrs. Murphy made me want to climb into her life. I was less inclined to experience Niamh's dinners of squirrel stew and jobs sewing clothes, but it was all brought to life vividly.

Molly, a Penobscot Indian, has a school project about portaging. This is a concept from the Wabanaki tribes who traveled a lot and had to carry all of their possessions with them. This means they always had to think carefully about what to bring and what to discard. Much like anyone who is transient, such as, oh, I don't know, a foster kid. This theme came up in both Molly's and Niamh's stories and I thought it was really interesting to think about. When you stay in one place for a long time you can just accumulate more and more stuff (ask me how I know) but moving always forces you to reexamine what you are holding onto.

My only complaint about this novel is that Molly's foster mother was disappointingly two-dimensional. I get that foster parents can be awful, but she didn't even seem like a real person, just a collection of annoying and horrifying traits. She won't acknowledge that Molly is vegetarian and continues to feed her things like Hamburger Helper (and complains when Molly tries to cook for herself because vegetables are too expensive). She whines about her uncomfortable chair at work, threatening a lawsuit. She listens to conservative talk radio and attends a fundamentalist Christian church. AND. She is at the breaking point with Molly because Molly committed a horrible, terrible crime and Dina cannot bear to put up with this any longer: Molly tried to steal a cheap paperback copy of Jane Eyre from the library. OMG, she tried to steal a free book! And not even the nicest copy, but one that likely would have been thrown out soon anyhow. Also ridiculous was that library staff had her arrested, rather than just saying "Oh, it appears you didn't check that out. Here, let me do it now," which is what I would have done, and which would have saved everyone a lot of hassle.

So the current-day plotline wasn't the strongest, but overall was still fairly good. I loved the historical part of the story a whole lot though, and I can see why this book has been so popular. If you like popular or historical fiction (particularly based on real events) you may well enjoy this novel quite a bit.
Posted by 3goodrats at 8:03 PM